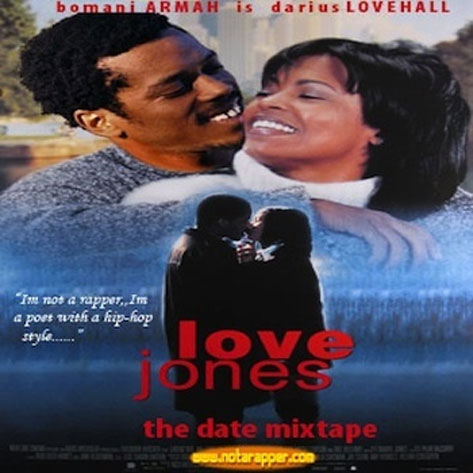 Bomani Armah -- he of "Read A Book" fame -- is ready for his closeup. No, the "poet with a hip-hop style" hasn't been cast in a feature film, but he is reprising a very famous movie character in his soon-to-be-released concept mixtape. Armah steps into the role of "Darius Lovehall" in Love Jones: The Date Mixtape, which will be released for free download on April 9th via his Bandcamp page.
Way back in 1997 before Tyler Perry had a stranglehold on urban movies, Love Jones was the film that had everybody flocking to theaters to see Larenz Tate and Nia Long's complicated love story unfold with spoken word, jazz, and neo-soul (before that became a bad word) providing the soundtrack. Now Bomani Armah breathes new life into this classic with his own twist on his latest -- and what might be his greatest from what I'm hearing -- mixtape. Aside from the whole genius of this entire concept, Armah is rhyming about some real, grown man business concerning relationships and love as it relates to the movie and his own life then and now. If, like me, you can't wait for Love Jones: The Date Mixtape to drop on Saturday, then download these two samples to get a taste of what's to come with "Goodbye Yesterday," which samples "Hopeless" by Dionne Farris, and "Try To Explain," which flips Lauryn Hill's "Sweetest Thing." Now if you'll excuse me, I'm gonna have these on repeat until I pop in the Love Jones DVD later on tonight.
Center


TAGS:  audio, bomani armah, darius lovehall, dionne farris, larenz tate, lauryn hill, love jones, mixtape, nia long"
Previous: We ‘Wonder’ If You’ll Love This C.9ine & João Orecchia Collaboration As Much As We Do Next: Mary J. Blige Is Looking For ‘Someone To Love’ Her Latest