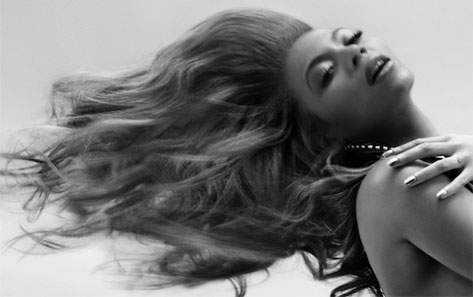 There is unrest in Casa Knowles. After the world failed to collapse on itself for her latest effort in vampy fempowerment, Team Beyoncé has gone on the offensive. Yes, she showed up and showed out with a three-pronged media assault (one splashy video and two killer performances), but they didn't break her into the hallowed iTunes Top Ten, like she had hoped. The most common critique, even after the brilliantly cacophonous "Run the World (Girls)" began to eat its way into our brains? "It just isn't very... musical."

Well, by leaking the stomper "End of Time" (more influenced by FELA! than Fela) and now rushing out sophomore single "1+1," Ms. Knowles is clearly growling at America: You want musicality? I'll show you musicality!
Center

From early in the cut, it's clear that this is going to be a costume-retro affair. And boy, does is it turn out to be. Bee is 100% Otis Redding in Prince drag, growling and whimpering over a sonic bed lifted straight from "Purple Rain," even borrowing the same key chord on which Alicia Keys built her own full-on "Rain" ripoff a few years back. There's no denying this track's sheer purpleness, right down to the balls-out guitar solo at the climax. However, none of this should come as a surprise to anyone, as this cut comes to us from The-Dream -- a walking Prince Halloween costume if there ever was one. The man has built a career on plumbing the depths of Prince's discography and crankin' dat Pat Boone all over it.

But it's a shame that he and Knowles take what is a fine vocal performance (but really, what Knowles exercise isn't) and turn it into something with no greater meaning than an overworked American Idol set. Knowles will go down in history as one of the most relevant Pop artists of our time -- seriously, she's been HBIC for almost a decade straight -- and if songs like "Halo" and the first half of her last album are any indication, she's now concerned with being taken at least somewhat seriously as an artist.

But the road to Hell is paved with good (if ultimately half-assed) intentions, and "1+1" ends up little more than an affirmation to the toddlers who Run the iTunes World that she's OMGsoooDeeep! The only problem is, these kids aren't nearly interested enough in depth (authentic or otherwise) to actually pay for it. And the ostensibly adult crowd that currently has Adele rolling deep in the dough (I've got iTunes puns for days, folks. Days!) will see through this wafer-thin grasp at artistic credibility and move, to quote someone Beyoncé may know, on to the next one.


TAGS:  adele, alicia keys, american idol", audio, beyoncé, itunes, otis redding", prince, the dream
Previous: Asia Bryant Is ‘Not’ Singing ‘Another Love Song’ Next: These ‘Pieces’ Of Ledisi Are ‘Alright’ With Us