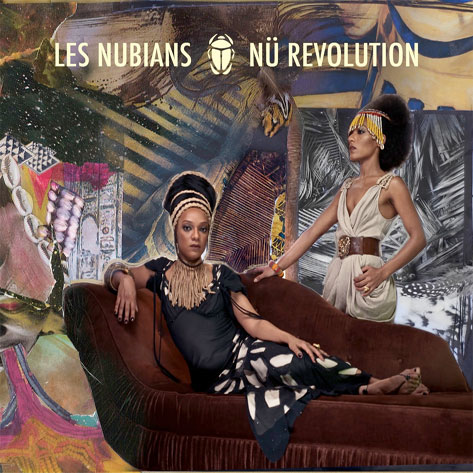 I was first exposed to Les Nubians via their collaboration with The Roots on "Tabou" from their debut album, Princesses Nubiennes. Sung in both French and English, the cover of the Sade classic "The Sweetest Taboo" was a fitting introduction to their so-called "Afropean" brand of soul. Effectively blending a collection of distinct genres from a handful of countries and eras, the accomplished French-Cameroonian sister act (Célia and Héléne Faussart) are back on the scene after several years away with Nü Revolution, their first independent album. Whereas previous releases may have been more deliberately eclectic, the sisters appear to possess a more comfortable control over their cultural hybrid sound.
Center

As a whole, the album is a celebration of life, womanhood, and love.
Taking time off to live life and enjoy motherhood, the sisters are "in a
happy place" and aim to project the "love, hope, and vitality" that
consumes them unto the world. Sonically, the album gets to that point at
the onset. It opens strong, with a pair of the most melodious, inviting
work I've heard from them yet. "Liberte," with its richly constructed
vocals, almost has a gospel feel to it. It's a big, moving love song
with a sweet acoustic guitar, a hip-swaying groove and not one, but two
key changes. Drama! A personal favorite, the title track, "Nü
Revolution," sung in English, has grand backing vocals that would make Mariah's
early '90s squad of big-hipped, big-lunged belters proud. Naturally, the
song embodies the uplifting, positive, love-heavy theme of the project,
urging brotherly love and sisterly compassion. "Give love...make
love...with no conditions," they instruct. That's my kind of party.


Having
come a long way from their humble childhood in a war-torn Chad, Célia
and Héléne are ever-aware and appreciative of how precious music is.
"During the war, there was a period of time when music was simply not
available to the public," they told me in a recent interview. "At least not the kind we
enjoyed as young people. There weren't always music stores. We would
have to go to the airports and wait for planes to land and make
exchanges with tourists to get access to new music back then." Such
experiences helped them see the value in music as art and a method of
healing. Their mother suggested that they "make music that would make
even a handicapped person want to get up, jump, and dance."

They
explained, "Tragedy is all around us. The world is definitely f---d up.
(laughs) The whole thing crumbling down. There are recessions, and
tragedies. We have to ask, 'How do we stay up? How do we stand up and
walk in these times?' So it was important to us to make music to lift us
up. Let's dance! That's the philosophy behind our work now."

This
dedication to uplifting through dancing is most evident on "Nü Soul
Makossa," a reworking of the often-sampled afrobeat/disco classic "Soul
Makossa" by Cameroonian saxaphonist Manu Dibango. He even assists
with saxophones and spoken word bits. If the chants sound familiar,
it's because the original inspired Michael's "Wanna Be Starting
Something." Sure, they come alive here, but this would an undeniable jam
even as an instrumental.

The oddly catchy "Afrodance"
stresses natural hair acceptance, something preached by their mother.
Though arguably not the best introduction to this project, the message
is admirable. "Hair and appearance are a way of reaffirming identity. In
the 70s, it was so important to appreciate the afro and show who we are
naturally," they explained. "The mainstream represents us as having to
have straight hair, but natural hair is beautiful. To us, it's all about
being natural and we are hoping to promote a stronger, more African
projection of ourselves."

The high hopes I had for their busy duet with SB favorite Eric Roberson ("Deja Vu") were resurrected by "Veuillez Veiller Sur Voz Revez (J. Period Remix)" and "Vogue Navire." The first features French hip-hop artist John Banzai and has an early Mary J. Blige vibe. The latter is a hypnotic ballad that could easily feature Sade's
sultry alto floating over the soothing long-distant lover's lament. All
of the big moments missing from other tracks are found in the bridge of
this song. Their voices shine here. Definitely a standout.

Being
honest, the sisters' French vocals greatly outshine their English ones.
Whether it comes from increased training or comfort in the language, or
not, is yet to be determined. There's a mastery and strength exuded
otherwise that doesn't always seem to translate into English. While
songs like "Afrodance" and "Africa For the Future" are just as
intriguing musically, some of the English songwriting leaves much to be
desired. As the closer, "Africa For The Future (feat. FreshlyGround)," is
Afrobeat-lite. Sure to get backs twisting and hips rocking, the song is
more of a restrained, well-intentioned jazzy groove rather than the big,
anthemic party song it was probably intended to be. The message of
unified celebration is clear and strong, and for what it lacks, the
song's ambition and genuine desire to bring about change, along with
their strong harmonies, all more than compensate. Fela would indeed be
proud.

Overall, the album shows that Célia and Héléne haven't
lost their ability to flow seemlessly between tongues, whether their
native French, English, or any of the many African dialects used here.
Their broad universal reach is certainly welcoming of new fans from
every walk of life. Their quest to promote global citizenship and world
awareness, unifying all cultures, beliefs, and backgrounds through music
and positivity is alive and thriving. The theme of revolution --"rêve" (dreams) + "eve" (evolution)-- is evident and contributes to the creative success and appeal of this project. Absolutely worth exploring.

Les Nubians is currently on tour. Check here
for tour dates. I'll get to see them live for the first time next week
when they take the stage at the Conga Room here in Los Angeles on May
21st. LA Bouncers can use promo code HARDY for $5 off when purchasing tickets online or at the box office.