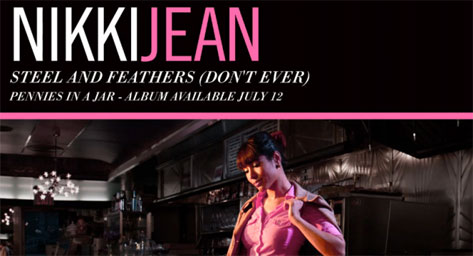 Nikki Jean, singer/songwriter and former lead singer of now defunct Philly band Nouveau Riche, has been keeping some pretty impressive company in the years since her band's demise. She played chanteuse with The Randy Watson Experience for their cover of Sting's "Be Still My Beating Heart" and showed up for two tracks on Lupe Fiasco's The Cool. Still, besides the constant updates via her video blog, new material has been few and far in between. Well, now Miss Jean is gearing up for the release of her solo album, Pennies In A Jar, which is scheduled to drop on July 12th. She's lined up an assortment of guests for the collection, including Dice Raw, Black Thought, and, of course, Lupe. More impressive, however are the songwriters she's collaborated with. Carole King (!), Burt Bacharach (!!), Bob Dylan (!!!), and quite a few others turn up on the album. She's decided to give her fans a taste of the new offerings with the Bacharach-assisted "Pennies In A Jar" and "Steel and Feathers (Don't Ever)," which was penned by both Jean & Dylan. The two contrasting sounds of these tracks have me anxious to see exactly what she's going to do with this record. You can take a listen to "Pennies In A Jar" below and "Steel and Feathers (Don't Ever)" after the bounce and see if you dig them as well.

Nikki Jean: "Pennies In A Jar"