This New Beyoncé Track Is Right On ‘Time’ 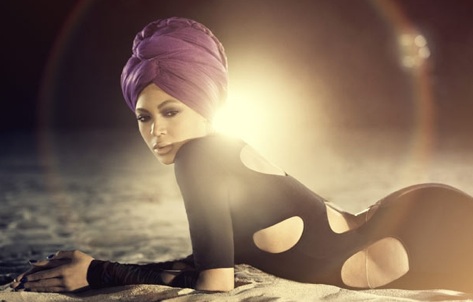 With her promotion offensive in full force, Beyoncé's name is on many
tongues of late. After two highly-anticipated performances this week
alone, everyone has something to say about Mrs. Knowles-Carter, good,
bad, or dismissive. The lead single from her upcoming album 4, "Run The World
(Girls),"
is wildly polarizing, eliciting equal amounts of thunderous
praise and raging criticisms. And, as always, her detractors' arguments
are often just as passionate as rants from stans. The debate over
whether grandeur and flash compensate for a perceived lack of substance
will never end. She, herself, has never proclaimed to be Maya Angelou in Louboutins
either, but that's beside the point. That there is always a discussion
about her, however, is also telling. In short: she matters.
Center

With the project, Bey's taken a decidedly more worldly turn,
experimenting with international sounds, drawing inspiration from
sources far and wide. One such source are the distinctive drums, horns,
and rhythms of Afrobeat legend Fela Kuti. Her husband's backing of the
FELA! Broadway musical couldn't have hurt either. Not unfamiliar with
borrowing generously, this African influence is evidenced on "Til the
End of Time," which surfaced in full over the weekend. There's been no
word on if this song will even make the album, but I adore it. It's a
big, energetic, horn-heavy production propelled by marching
snare drums and a grooving Afrobeat bass line. She even brings back
super-fast rap-singing from her Destiny's Child days. Sure, it's a love song,
but it's a departure from the infectiously trite, declarative girl-power
stylings she favors.

While it arguably required visuals to really sell listeners on "Run The World (Girls)," -- and even still, it's no threat to Gaga (or Kelly Rowland
for that matter) on any chart -- this was an instant jam. It's impossible
for me to hear this song and remain still. And I am certain that I'm
not alone in picking up on
the Lionel Richie vibes in her melodies. As much as this song
wins, it will sound several times better when played live by her band.
Yeah, this is more like it. Give me five of these over one
well-choreographed, catchy black girl anthem any day.

Beyoncé: "Til the End of Time"

TAGS:  audio, beyoncé, destiny's child, fela, fela kuti, kelly rowland", lady gaga", lionel richie, maya angelou
Previous: Kindred The Family Soul Shows Us That Their ‘Love Has No Recession’ On New Album Next: Morning Soul: One Night In The Disco On The Outskirts Of Frisco