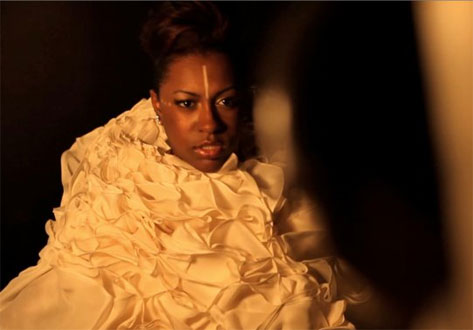 It seems as if moreso than in previous years that 2011 is turning out to be the Year of the Remake. We've heard some good, some bad, and some downright fugly, but in the case of France-born, NYC-based singer Anais Aida, her remakes fall into the excellent category. First she wowed us with a gorgeous cover of Janelle Monáe's "Say You'll Go," making instant fans out of us here at SBHQ. Now she is two-for-two with her beautiful interpretation of Anthony David's "As Above So Below," the title cut from his latest album. Accompanied simply by an acoustic guitar (expertly played by Matt Parad) Aida adds her feminine flourishes to David's gritty-yet-smooth original. The artist himself has even heard her version and given his stamp of approval -- it doesn't get any better than that. Well, actually it does, because this is the first of four new cover songs that Anais will be releasing this month leading up to the release of her official first single, "Love Can Burn." We'll be waiting with hungry ears. Listen to and download "As Above So Below" below, and watch a video recorded while she was making the track after the bounce.