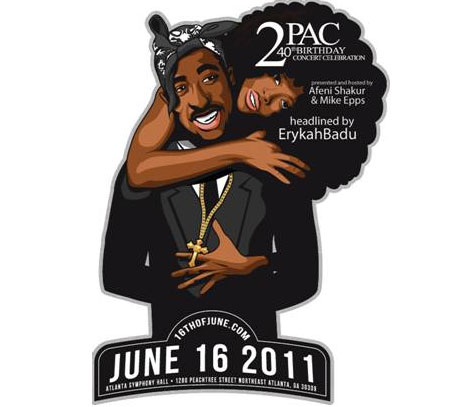 If he were alive, Tupac Shakur would be celebrating his 40th birthday this month. Though he may have often been controversial, he left behind a musical legacy that is still being mined today. Though he's no longer with us, his mother Afeni Shakur along with the Tupac Amaru Shakur Foundation is still celebrating this milestone in Atlanta on June 16th. The event, which has been held every year since 2009, will, of course, benefit the foundation, which promotes programs for youth interested in the arts and other creative endeavors.
Center

First, let's discuss the show (and then we'll move on to the insanity of the graphic used on the flyer). The event has lined up some heavy hitters for the occasion. Comedian Mike Epps, who just starred in Jumping the Broom, and Afeni will be the event's co-hosts. Headlining will be the analogue girl in digital world herself, Erykah Badu. Along with Badu, jazz and funk legend Roy Ayers, Bun B, Too $hort, Eric Roberson, 8Ball & MJG, and others will also be performing. A special tribute to Nate Dogg will also go down on stage.

Now, as for that absurd graphic, it was inspired by a 2008 Trace magazine cover featuring Badu and fellow shirtless Soulquarian Q-Tip. This, though, actually looks more like a poster for a blaxploitation flick or one of those velvet, blacklight posters hanging in some college student's (or over-the-hill bachelor's) apartment. That is to say, it just seems more than a little bit odd when repurposed here, maybe because it's a horrible graphic design job a simple picture of 'Pac would've been just fine.

At any rate, the show promises to be a good one. If you live or happen to be in Atlanta around the 16th, head here to get your tickets and be prepared to have a good time celebrating 2Pac's legacy and helping out a good cause.