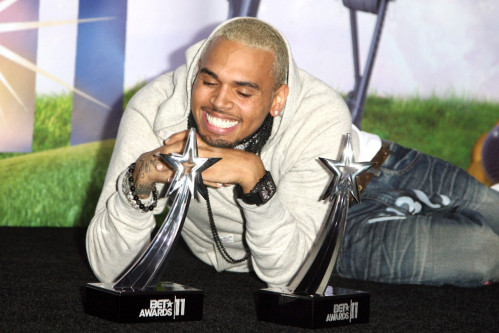 The BET Awards, without fail, offer up a distinct brand of buffoonery every summer that never ceases to entertain. They are the terrible crash you want to bypass completely but you couldn't take your eyes off of it even if you tried. You can set your clock to the coonery of the BET Awards, and this year was no different. Kevin Hart hosted this year's show and, all things considered, did a fairly decent job. The normal line up of commercially successful R&B and hip-hop artists showed their faces, but this year's show brought its own unique touch of craziness that made it incredibly enjoyable to watch, especially with social media in the mix.
Center

Twitter is the new water cooler that people gather to whenever something interesting is going on, and it makes watching any awards show an event in and of itself. People can collectively clown their favorite celebrities, making a show like the BET Awards ripe for comedic commentary. We here at SoulBounce decided that the best way to wrap up the ratchetry of the 2011 BET Awards was to break the show into three categories: The Good, The Bad, and The Ugly.

Jill Scott
Ms. Jilly from Philly had on a smoking red dress, awesome staging for her performance, and Idris Elba as her love interest. Oh, and of course her vocals were on point. Need I say more?

Cherrelle and Alexander O'Neal
Your mom's frisky best friend and her play husband grinding and singing "Saturday Love" like they just drank a whole bottle of Wild Irish Rose? Nothing but win. Cherelle shimmied in her shiny dress, and Alexander's teeth looked like a row of Boston Baked Beans in his mouth. And then she kissed him in the mouth -- tongue and all. OK, so maybe this doesn't sound that good and was hard to watch, but my goodness it was beautiful to hear.

Mandatory Gospel Performances
The usual suspects were there to make sure to bring the BET Awards to church. Mary Mary, Dietrick Haddon, and Donnie McClurkin all blew. The voices in the gospel segment sounded ten times better most of the other vocal performance on the BET Awards, which is par for the course.

The Tributes
Warren G is definitely an old school fool, but he laid down "Regulators" like a 23-year-old young buck. King Queen Latifah did the damn thing with the Gil Scott-Heron send up. And Ledisi. Ledisi, Ledisi, Ledisi. Her voice was perfect for the Teena Marie tribute and is everything that is right in the world.

They saved the best for last, though, when Cee-Lo Green KILLED the Patti LaBelle tribute. His Patti Patti wig brought everyone back to life and Marsha Ambrosius slayed the audience again by hitting those high notes. Shirley Caesar looked like Glenda the Good Witch in her glittery confection of a dress. The only things missing were the Patti LaBelle shoulder dance and the fact that no shoes were kicked off during the course of the tribute or Patti's performance.

Nicki Minaj and Justin Bieber
It was Biebz' first BET Awards, and man oh man it was weird. The whole "Can you drive? Can you handle curves?" dialogue was gross and frightening. The fact that he thought that he could talk to a grown woman like that, and the fact Minaj was comfortable talking slick to a minor was enough to bring Chris Hansen out to catch a predator.

Network Censors
Whoever's job it was to keep the cuss words off the air failed worse than, well, BET at meaningful programming. All sorts of profanities were flying through the airwaves over the course of the night, only to be belatedly bleeped.

Rick Ross' Performances
Rawse came on stage looking like a large Christmas tree ornament in that red jump suit, and sad to say that he's not good at commanding the stage. Then, he opened his shirt. His tits were bouncing and bopping more than the babes on Baywatch. Seriously, Rozay, would an undershirt have killed you because your lack of one certainly killed us.

Singers Who Really Can't Sing
Drake, Trey Songz, etc, etc. Most of these folks can barely sing in the studio, let alone live. It was hard to listen to when there were artists with more talent (and vocal stamina) just sitting out in the crowd or behind the scenes. Seriously, the quaking voices during the live performances were straight awfulsauce.

Temptress Alicia Keys
Mrs. Beatz looked less than tempting on top of the piano, looking and sounding like hell on a hot day. And poor little Bruno Mars. Why did they let him leave the house looking like the man on the side of the Duke Sport 'N' Wave box?

Debra Lee's Dress
A friend from my Twitter timeline put it best: "Debra Lee did the ole snatch-the-tablecloth-from-underneath-the-fine-china trick and wore it. Respect."

Tiffany Green
This poor girl. Chris Brown, Rihanna, and Drake were all up for the Viewer's Choice Award, and because of a technical mishap Tiffany stated the wrong winner. The entire audience let out a collective sigh of disbelief, and by the time everyone figured out that Chris Brown had actually won, the poor girl had been slandered via Twitter.

Oh BET. You never cease to amaze, delight, scare, and disappoint. Bouncers, what is missing from this list? At what point during the BET Awards did you realize that when you judge the people who watch them that you are really judging yourself? Did you really think Beyoncé was going to make it in from Glastonbury in time for the show? If Free's behind clapped a distress signal on a deserted island, how long would it take to rescue her? So many questions, so few answers.