Thundercat Is Coming ‘For’ Your ‘Love’ 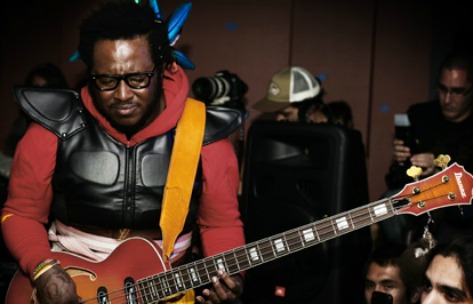 You may not know his name, but you are likely familiar with the work of Stephen "Thundercat" Bruner. If you've seen a bassist wearing a Native American headdress rocking out behind Erykah Badu or dug the vocals and bass on "Mmmhmm" by Flying Lotus, you've observed Thundercat at work. I was first introduced to him when he backed J*DaYeY here in Los Angeles last year. Erykah gushes about him regularly. Bilal featured him in his trippy "Levels" video. In short: the man is no joke. Now, he's preparing to take his rightful place in the spotlight with the release of the FlyLo-produced The Golden Age of Apocalypse this fall. Our first peek at what's in store comes in the form of "For Love I Come," his reinterpretation of the George Duke jam, "For Love (I Come Your Friend)." Showcasing his vocal abilities here, he slows down the bustling groove of the original, giving it a spaced-out, celestial makeover. This is how you approach a cover. Ahem. The ethereal jaunt stays true to the intentions of the original while carving out space for Thundercat's unexpected but necessary wicked bass solo at the end. Consider me an instant fan.
Center