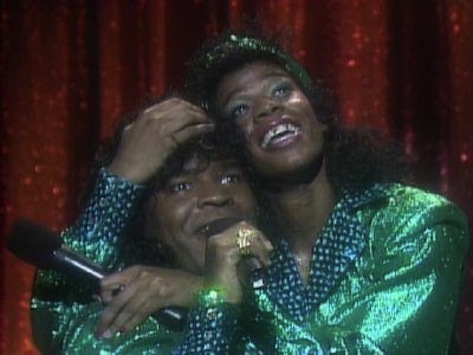 While watching the EBT BET Awards this past Sunday, one performance in particular stood out to me as especially riveting to watch: Alexander O'Neal and Cherrelle's "Saturday Love." It's easy to assume that the spectacle of two geriatric mature adults singing about weekend lovin' is the only thing that drew me in, but certainly older adults are entitled to be grown and 'get that old thang back.' Nor did Alexander O'Neal's eclectic oral situation draw me deeper into their little show. No. It was the sneaking feeling I had, during their performance that they were...

Now, my suspicions weren't really founded in anything tangible, there was just something about how they sang to each other. The chemistry was insane, almost as if the entire BET Awards audience was interrupting an intimate moment between the two of them.
Center

And that, my friends, is the beauty of the duet. A real duet. Singers don't even have to be doing "it" for the song to be good, but if you listen to the song and wonder if they did "it" -- that's a powerful thing. Apparently this logic isn't too far off track, because in an interview with BlackAmericaWeb, Cherrelle says that she could never convince people that she and Uncle Alex weren't making the beast with two backs:

We had to tell people a million and one times that we were not married, we were not lovers, and I don't care how many times we said it, people would believe what they wanted to believe.

Well damn. That is suspension of disbelief if there ever was any.
Today it seems that everyone is going solo and featured artists are more of a decoration than a substantial element of the song. It takes two to tango, and, not surprisingly, two is also the magic number for making a smoking soul ballad. The following duets have a scintillating quality that would be well served in today's market of lone wolf performers.

A few recent examples of decent duets and notable exceptions to this whole "they must be sexing to be singing like that" idea: Jill Scott and Anthony Hamilton's "So In Love," Anthony David and Algebra's "4evermore," and Eric Roberson and Lalah Hathaway's "Dealing." The difference is that all of these artists can blow and they're pretty good at faking like they are madly in love with each other even if that is not the case. Unfortunately, that type of talent isn't really that common. Personally, I think the hottest duets happen when the singers make each other scream in the studio and elsewhere. Just ask parents of six Kindred the Family Soul.