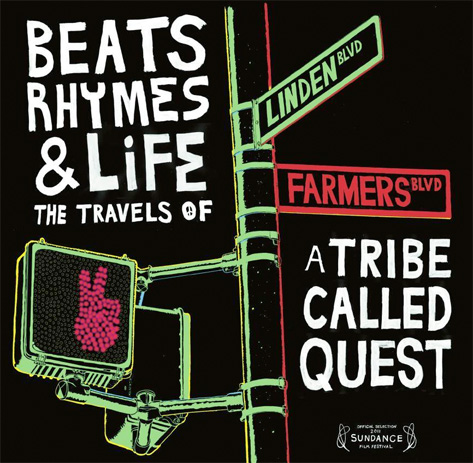 "In the beginning there was the Blues. And the Blues begat Jazz, and Jazz begat BeBop, and BeBop begat Hip-Hop." -- Unknown

Beats, Rhymes & Life: The Travels of A Tribe Called Quest is a fascinating documentary about legendary hip-hop group A Tribe Called Quest. Directed by actor Michael Rapaport, the movie has been gaining momentum since it debuted at Sundance, generating interest across the country. Here at SoulBounce we spoke a bit about the movie prior to its release (here and here), but now the film is more widely available. It is, in short, completely worth seeing.
Center

At first blush, the movie appears to just be about the origins of Q-Tip, Phife Dawg, Ali Shaheed Muhammed, and Jarobi; their musical contributions to hip-hop; and the movement they actively participated in and advanced. The group's members all look more mature -- more weighty. Peers like the Jungle Brothers, Monie Love, Prince Paul, DJ Red Alert, and others reflected on their experiences with the Tribe, giving the audience an idea of the machinations of the hip-hop industry during the late '80s and early '90s. For someone who was five years old when People's Instinctive Travels and The Paths Of Rhythm dropped, this documentary shed light on one of the most creatively rich eras in black music. For others, it is remembrance of the introduction of a new way to be -- young, black, intelligent, street smart -- as well as a reminder of the cultural power that positive rap can have.

More interesting, however, was how the film morphed from a show and tell of the Tribe's existence into a full-fledged examination of the human experience via the contentious relationship between Q-Tip and Phife Dawg. Reminiscent of the Bible story of brothers Jacob and Esau, the bond between these spiritual brothers fueled much of the group's controversy on and off screen. Q-Tip is Jacob, cunning philosopher, musically brilliant, and filled with personality. Phife Dawg, conversely, is just as (if not more) skilled with his flow, and possesses an earthiness that seemed to put him at odds with Q-Tip's idea of what the group should be. It honestly felt like they both wanted to have the birthright -- the lead position within the group -- with introverts Jarobi and Ali Shaheed as bystanders in this power struggle. Phife Dawg's illness and Q-Tip's success after the dissolution of the group fanned the flames of this tension, which ultimately made for a gripping viewing experience.

You should see this movie. You may cry at the situations these men find themselves in, and you will definitely marvel at their artistic ingenuity. You should take a friend who has never heard of A Tribe Called Quest to see this movie, if only for the history lesson. Just see it. Not only is it a glimpse into one of hip hop's most intelligent and influential groups, but it reveals something deeper about human nature that will grab you at your core. At the end of it all, the truth of A Tribe Called Quest's music and accomplishments continues to live on and will for generations to come.