Is This New Super Group SuperHeavy? 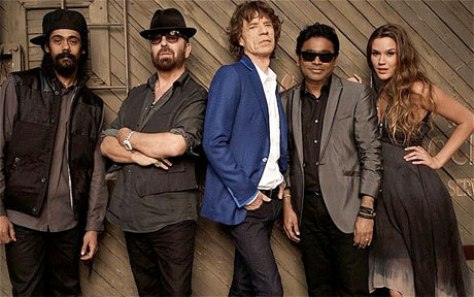 Let's face it, so-called "super groups" (loosely defined as groups made up of established, popular solo artists) rarely make it past the concept stage. Sure, we had the fantastic yet short-lived Lucy Pearl (Raphael Saadiq, Ali Shaheed Muhammad, and Dawn Robinson), but most are announced with a rush of excitement only to fizzle out without so much as a single track. How many of us hoped and prayed for an album from the Soulquarians only to be left disappointed? (Granted they were more a production team, but hey we hoped right?) Who thought that Lynwood Rose (Raphael Saadiq, D'Angelo, and Q-Tip) would be the ultimate guy group? Tamia, Kelly Price, and Deborah Cox could have shown the ladies a thing or two with The Queen Project, but no, it didn't materialize. Last year there was a rumor that the late, great Ms. Amy Winehouse would be teaming up with non other than ?uestlove, Raphael Saadiq (his name keeps cropping up), and Salaam Remi, if only they could overcome Amy's visa issues. Sadly that will never happen now. So where does that leave the fabled super group?
Center

Well, earlier this year it was announced that Joss Stone, Damian Marley, Mick Jagger, A.R. Rahman, and Dave Stewart were forming the group SuperHeavy
and would be releasing material later in 2011. My first thought was
"oh, of course they will" accompanied by a rolling of the eyes before moving on to the next
news snippet. However, it seems that I was wrong. Not only have
SuperHeavy recorded a single, but they have a full album available for
pre-order on iTunes. They describe their sound as "eclectic" and "nothing like you'd expect." It may just be me but "Miracle Worker" is pretty much exactly what I expected, a
rock/soul/reggae mash-up that provides a half decent head-nodding beat
and a kind-of-catchy chorus, but certainly nothing groundbreaking. I
have a feeling this collaboration may produce one or two decent tracks
but will be hard-pressed to create an albums worth of quality material.
Joss and Damien actually sound rather nice together, but Jagger's
high-pitched screeching adds little to the mix. We'll know for sure
when the album is released on September 20th.