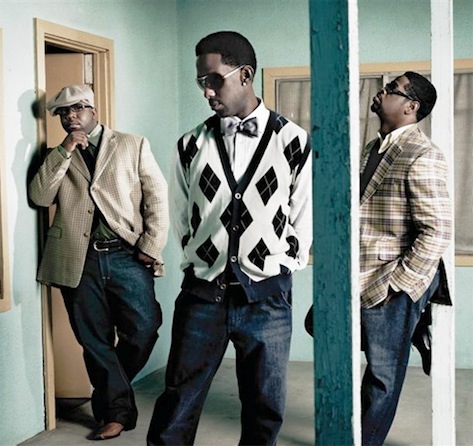 I've never been a conscious fan of Boyz II Men. Like my appendix, tonsils, and vestigial tail, I didn't know what the quartet meant to me until they were gone. Thanks to the worship of a Wanya-crazy sister, I did all I could to ignore them in my youth. Easier said than done -- they were ubiquitous in the '90s, with a Hot 100 track record to rival (and in some ways, beat) '90s demigod Mariah Carey.
Center

But looking back, BIIM was definitely the truth. They released one of the Holy Trinity of '90s Hip-Hop Ensemble Remixes, they showed groups like Shai how to make a jeep-ready a cappella record, and created one of the most surprisingly kick-ass group karaoke numbers of a generation. Then came the breakup and the great fall. I had predicted it would happen earlier, with "Evolution -- with the rise of Jodeci and the emergence of Jodeci-lite, I felt America was done with the squeaky-clean R&B groups with matching outfits. Of course, I was wrong, and Evolution went on to sell four million copies worldwide.

Sadly, I was proven right on the next album. Kinda. America wasn't just done with boy scouts -- even "bad boy" vocal groups suffered as America tried to shake the shameful hangover signs of a one-night stand with boyband mania.

But the guys are on their way back! Fresh off Shawn Stockman's turn on that other-other singing competition TV show, the boys are taking another stab at it. No, they still haven't brought Michael "Bass" McCary back into the fold, but we'll take what we can get.

On their comeback effort, the group is offering 10 new songs, after a decade of singing covers like Pat Boone's more talented, melanin-richer brothers. (But after the planewreck that was "The Aaliyah Song," can you blame labels for their uncertainty?) Still, they're hedging their bets by packaging the new material with a Greatest Hits collection.

To be sure, they're wise to be worried -- they're trying to break into a very different music industry. Their last four albums sold abysmally, Shawn just had to sit through a season of being a less-respected music industry figure than Christina Aguilera, and then there's the elephant in the room. Though they may have grown into their looks, the fact is if they were a bunch of (yes, insanely talented) upstarts today, they'd be laughed out of every major label office for not being telegenic enough. (And then they'd probably have to sign to TVT or Slip N' Slide Records, the equivalent of a back-alley abortion in R&B circles.)

Still, like '90s counterpart Carey said after mounting The Comeback Nobody Predicted (and before inviting the surviving Boyz to relive the era on the resulting tour), "you can't count out talent."

The road looks rocky, especially without the full-comeback buzz a four-man BIIM would bring but I hope Mariah's right and I'm proven wrong.

I kinda liked it the last time that happened.