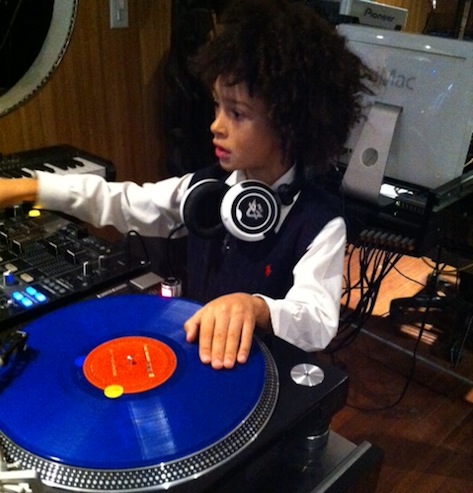 I can't remember exactly what I was doing when I was seven, but I suspect it had something to do with precisely organizing my Crayola crayons by color or dressing my Barbie dolls up for imaginary nights at Studio 54. But a lot has changed since the late '70s/early '80s, and I suspect that if I were growing up today that crayons and dolls wouldn't cut it. That looks to be the case with a seven-year-old New Yorker who goes by the name of DJ Arson who is more interested in the ones and twos. Yes, he's a DJ, and, yes, he is pretty hot given his age. There's not much information about this young turntablist available online outside of his Twitter bio, which reads: "I'm seven years old...I'm a DJ and a B-boy. I like raw food, playing soccer, baseball, cooking with my mom, bey-blades, pokemon, and traveling." He sounds like a normal kid to me, albeit one who has the taste to put together a mini-mix that you can listen to below with songs by Rick James, Grace Jones, Teena Marie, Estelle, and Michael Jackson.
This is not bad at all, and with some practice this wee one will only get better and perfect his craft. I don't know for sure if this child is the youngest DJ in the world, but he's definitely the most adorable.