The Foreign Exchange Invite You To Be Their ‘Friends’ 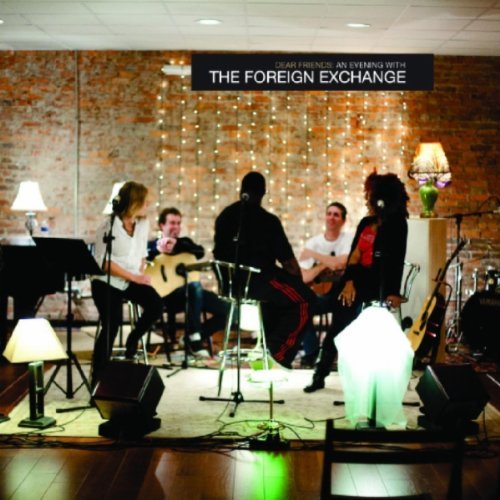 You might own all of their albums, but you haven't truly experienced everything The Foreign Exchange has to offer until you've seen them live. One of the most amazing things about the group is that it is a musical collective in the truest sense of the word. Originally started as a long distance collaboration between then Little Brother member Phonte and then Netherlands-based musician/producer Nicolay, the cast of characters has blossomed to include a who's who of independent R&B artists who've become family. Perhaps that's why Dear Friends: An Evening with The Foreign Exchange feels so relaxed and comfortable.
Center

Dear Friends is FE's first live recording, and they've decided to go the more intimate acoustic route for the occasion. The +FE crew, for this set consisting of Phonte and Nicolay as well as Sy Smith and Jeanne Jolly on vocals and Zo! on keys, kicks off with Authenticity's "Fight for Love" and then jumps into "All Roads" and Leave It All Behind's "Take Off the Blues," setting up the disc's mellow mood. Each of these tracks lend themselves well to the set's acoustic stylings, actually seeming to expand a bit musically.

After the first three songs, you'll get one of the first moments to experience the pure comedy that is Phonte as he introduces the band. Each band member with a hilarious anecdote about working with them. This then segues into "Lose Your Way" from Nicolay's City Lights and is then followed by a short dip into LIAB's "House of Cards."

After a brief story of airplanes and Tourette Syndrome (trust me, you'll wanna hear it), we are treated to Sy and Zo!'s "Greatest Weapon" from the latter's Sunstorm album. Almost similar to the album version, it's pitch-perfect here. An unexpected (but still right up their alley) cover of James Taylor's "Something in the Way She Moves" is next. While it does draw out some of Phonte's vocal limitations (some notes he kind of talks his way through here), it's a decent cover that works within the +FE aesthetic. "Laughing at Your Plans" also gets the live treatment, with Jolly trading lead vocals with Phonte on the heartfelt song.

The highlight of the set is a version of "Daykeeper" steeped in country twang that surprisingly works, showing just how diverse and talented the +FE crew really is. And, as if to really prove, the song then shifts to a live chopped and screwed rendition that gets the audience hyped before changing once again to interpolate Sly Stone's "I'll Stay."

The live set closes with +FE favorite "I Wanna Know." Scaled back from the studio version, the song's plea seems more simple and honest here. Toward the end, Phonte invites the in-studio audience to sing along with Sy Smith during the chorus ("Now all of you have the opportunity to tell your people, 'Oh yeah, I was on The Foreign Exchange album. I work with them,'" Phonte quips) and brings the evening to a close with a sincere thank you.

Two additional songs are included in addition to the live recording, "Steal Away" and "All the Kisses." "Steal Away" features Jeanne Jolly on lead vocals and is a smooth, mellow groove carried by Jolly's graceful voice. "All the Kisses" is the much-talked about collaboration between +FE and Paris and Amber Strother from R&B underground sensation KING. While I absolutely adored "Steal Away," "All the Kisses" had to grow on me. My one major gripe is that it's not really a collaboration as much as it's Phonte singing with Paris and Amber providing back up vocals. I was excited when I heard about the team up, but I was expecting just a tad bit more.

This album is a great introduction for those uninitiated in what exactly a live show by The Foreign Exchange is all about. But don't be mistaken, while Dear Friends is a good placeholder, it still doesn't serve as a substitute for the real thing. So, when you purchase this album make sure to also keep an eye out for the next time The Foreign Exchange will be blessing a stage near you.