Trombone Shorty To Give It To You ‘For True’ This September 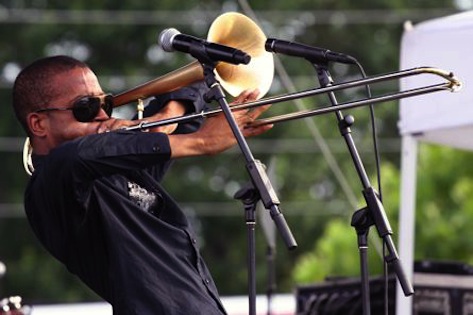 New Orleans native Troy Andrews, perhaps known better as Trombone Shorty, and his band Orleans Avenue took the world by storm with his GRAMMY-nominated debut Backatown early last year. With that album, the accomplished musician spent 10 weeks at #1 on the Billboard Contemporary Jazz Charts and brought the sound and soul of his beloved hometown to the masses while receiving praise from many of his contemporaries. He's also managed to become a media darling, getting shine in the pages of Rolling Stone and Entertainment Weekly as well as making appearances on The Tonight Show, Jimmy Kimmel Live, and HBO's Treme. Now the singer/songwriter/multi-instrumentalist is bouncing back onto the scene with his follow-up album For True. The album promises to be a fun ride and features the likes of Lenny Kravitz, Lamont Dozier, Ledisi, and The Rebirth Jazz Band among many others. So if you like your jazz with a bit of New Orleans swing and modern flair, make sure you pick up For True when it hits stores this September 13th. For those not familiar with Shorty, hit the bounce to check out a video of him performing at the Safeway Blues Festival last year. [Photo: Everett R. Davis]


TAGS:  lamont dozier", ledisi, lenny kravitz, orleans avenue, the rebirth jazz band, trombone shorty, troy andrews
Previous: Morning Soul: I Knew That There Would Be Days Like This Next: The Foreign Exchange Invite You To Be Their ‘Friends’