Bounce-Worthy: Balance And The Traveling Sounds 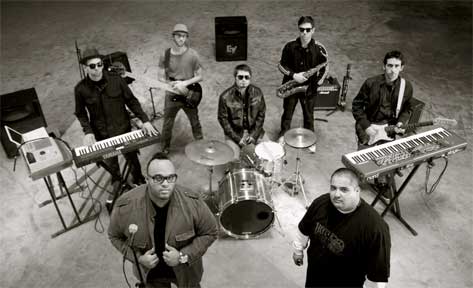 If there's one surefire way to get on a hip-hop or soul music lover's radar, it's to do a cover of something by J Dilla. That's precisely how I learned of the group Balance and the Traveling Sounds when I saw the music video for their live recording of "Won't Do" featuring Krys Wright (which you can view after the bounce). Talk about a funky introduction to how nice they are. The seven-man outfit hails from various points on the map of California and their eclectic stew of cultures, musical tastes and sounds comes together to create one of the most exciting hip-hop, soul and jazz fusions that I've heard in a while. Made up of band members EBO, Jeff Kolhede, Julian Hogan, Ryan Kern, Scott Hunter Fulton and KIRB and Mike Eddie holding down MC duties and vocals respectively, Balance and the Traveling Sounds formed in 2008, released their debut album, Travel Guide Volume 1, in 2009, and have blessed the masses with their sophomore project, Departure EP, just this week. The new six-track collection takes listeners on a journey through sound that you won't want to end once the last song plays. To ensure that more people get into their groove, BTS is giving away Departure EP for free, which is almost a crime for them not to get compensated for music this good. If you love what you hear, though, feel free to leave a love offering behind on Bandcamp.
Center