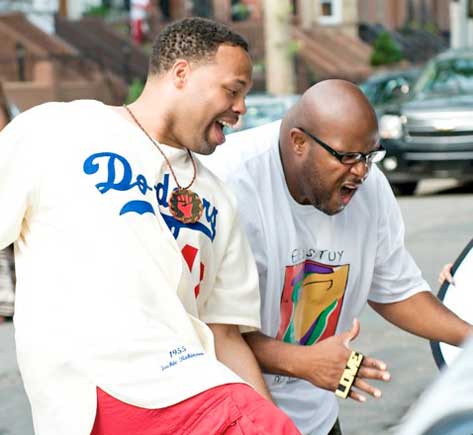 Where, oh where, did the summer go? With today being the last day of damn near everyone's favorite season, your friendly SoulBounce Editors decided to look back on the summer that was and some of the music that made our days and nights even hotter. We've gathered our picks for the jams that we had in heavy rotation on Hot 16: SoulBounce's Songs of Summer 2011, and the selections are as eclectic as we are. You'll find some SB faves on this list as well as some surprises. Hit the bounce to peep our Hot 16 in no particular order, and feel free to share your own by leaving a comment. We may not want to let the summer go, and with these cuts on our iPods we won't have to.
Center

Eric Roberson feat. Chubb Rock: "Summertime Anthem" [Listen][Buy]
With a name like "Summertime Anthem," how could Erro's heater single from Mister Nice Guy not be on this summer's hit list? The Chubb feature, the George Benson sample, a couple of tight remixes, and the Do the Right Thing-inspired video, just added its warm and sunny appeal. I'll be rocking this one for summers to come. -- Butta

Beyoncé feat. Andre 3000 & Kanye West: "Party"  [Listen][Buy]
Beyoncé certainly knows how to get the party started and may have partied too hard -- she's got a belly full of baby right now -- but this song definitely is guaranteed to have you snapping your fingers and doing body rolls in the car. Coupled with a verse from the elusive Andre 3 Stacks and a new Kanyeism ("swagu"), this joint deserves a spot on the list. -- NubianEmpress

Deborah Bond: "5:35" [Listen][Buy]
Deborah Bond's long-awaited July release, Madam Palindrome, set my summer off, and the song that I had on repeat was "5:35." The funk groove sounded as if Incognito and Brand New Heavies had a beautiful baby and named it Deborah. The lyrics, the bassline, the background harmonies -- everything about this song just worked. -- Butta

The Throne feat. Frank Ocean: "No Church in the Wild" [Listen][Buy]
While I've yet to be fully sold on Frank Ocean's singing abilities, there's at least one thing for certain -- the man makes memorable hooks. While the thumping track, coupled with Kanye West's and Jay-Z's verses add to the song's bump-worthiness, it's Ocean's hook that made itself at home in my head this summer, easily making it my fave from the much buzzed about Watch the Throne album. -- Ivory

Les Nubians feat. Manu Dibango: "Nü Soul Makossa" [Listen][Buy]
From Brooklyn to Barbados, this cut's positive French verses (chanted over a faithful sample of Manu Dibango's legendary "Soul Makossa") kept me lifted all summer long. Then again, it's hard to not make magic when you're working with the single catchiest line in music history (with apologies to "Heavy like a first-day period"). Just ask Michael and Rihanna. Bonus points for bringing the man himself back for this update. -- Remi

Dego feat. Sharlene Hector: "Start A New" [Listen][Buy]
Summer usually signals the start of the party season, and what does a party need? Great music, of course. Dego's A Wha' Him Deh Pon? was chock-full of broken beat goodness but it was the album opener, featuring soulful songstress Sharlene Hector, which was guaranteed to get heads nodding and feet tapping. -- SoulUK

Hot music was coming from every direction this summer, and Little Dragon's third album, Ritual Union, delivered its fair share. "Brush the Heat," the album's third track, not only spoke to just how hot this summer was, but it is a certified banger filled with cowbell and an undeniable groove that makes you wanna shake that thing (just like Yukimi does in the track's video). After hearing this, how can you not give in to the rhythm of your feet? -- D-Money

Swizz Beatz feat. Eve: "Everyday (Coolin')" [Listen][Buy]
Say what you want about Swizz Beatz (and there's a lot to say), the man pretty consistently comes with the beat sickness. And that's really all there is to know about this song -- the eardrum-exploding thump/banshee combo...and how it once again makes you pop in your old Eve CDs in remembrance of what once was. -- Remi

Tawiah "Sweet Me" [Listen ("Greenmoney Remix")]
Most of us have been waiting for what feels like an eternity for some new material from Brit talent Tawiah. 2011 has delivered three-fold with the acoustic goodness that was "Break Away" and "Starts Again" and her appearance on a remix of Cee-Lo's summer hit, "I Want You." However, it was Tawiah's soon-to-be-released single, "Sweet Me," which became the soundtrack to my summer. A ridiculously catchy beat and Tawiah's powerful vocals combined to give a Janelle Monáe-esque vibe that'll be sure to light up a dance floor or two later this year. -- SoulUK

JKriv: "Just Another Night" [Listen][Buy]
For me, summer is just not complete without a good song to hit the dance floor to, and this year Tortured Soul member JKriv provided it. This house number, featuring vocals by Adeline Michele, has all the right things going for it: great vocals, a funky bassline, and multiple remixes to suit any mood your dancing feet desire. -- Ivory

iSHE & Hezekiah: "Stand Guard" [Listen][Buy]
I must admit that I developed a bit of an obsession for iSHE & Hezekiah's "Stand Guard." This sassy tune sauntered into my summer playlist and never left. Whether you are booed up or not, you can appreciate iSHE's passionate yet groovy declaration of love. And how often does one hear "he ain't no captain save a hoe" sung so beautifully? -- Peachy Kween

The Throne: "Otis" [Listen][Buy]
Like Meth and Red's "Rockwilder" before it, "Otis" has only one real failing: at just under three minutes (30 seconds of which are spent on the intro), there just isn't enough of it. Jay and Ye's playful flow on the insanely exuberant production, featuring a sample of Otis Redding's "Try A Little Tenderness," had me doing Dame Dash's patented drunk-dance like it was 2000 again. -- Remi

1-O.A.K.: "Rewind" [Listen][Download]
Reminiscing on "throwback passion" never sounded so good on this upbeat jam by 1-O.A.K.. It had enough funk on the synth (and in the content) to make you want to squeal like Prince Rogers Nelson. Something about it makes me want to grab a popsicle and bounce around. A great way to end the summer! -- NubianEmpress

Beyoncé "End of Time" [Listen][Buy]
Sure, we've thrown a loving bit of shade at mommy-to-be Beyoncé's 4, but one thing we can't deny is the sheer force of the album's stunner "End of Time" as a summer anthem. It's got it all: marching band drums, bombastic horns, a chorus made to sing along to, and the fact that it's a sunny, happy song about a love that'll last forever. We may not be bumping the rest of 4 after this year, but we'll be playing "End of Time" until it's summer all over again. -- D-Money

Hawthorne Headhunters: "If You Were My Baby" [Listen][Buy]

"If You Were My Baby" by the eclectic yet ever so talented collective that is Hawthorne Headhunters consistently grooved my summer playlist. This song is as jazzy as it is funky, it's a modern day love song at its best -- the kind you can jam to. -- Peachy Kween