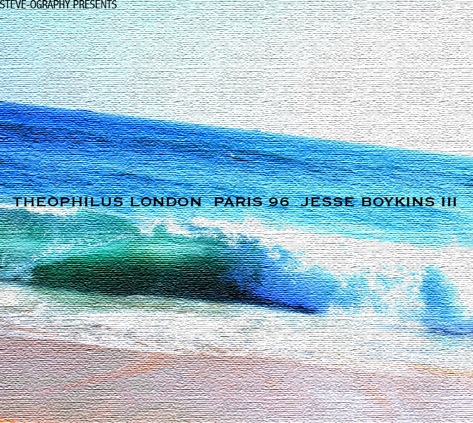 Paris 96 by Theophilus London and Jesse Boykins III is one of those mixtapes I wouldn't
like if I'd just listened to it on my laptop or if someone played it for me. But if I was at say, the MAC
counter, and they had it pumping while I was getting a makeover, guaranteed I'd be like "Whoa, that is
smooth! Who is that?" As such, Paris 96 is like a wine that's meant to be drunk with a meal, not sipped
alone.
Center

It's interesting that the genre for this project is listed as "world soul," and I thought that was so poignant given the rich
tapestry of musical influences from New York City, Trinidad, Chicago, Jamaica, and Miami that London and Boykins bring to the mix. Indeed, world soul
is the perfect moniker. Woven throughout this work you hear '60's and early '70's purist soul, '80's new
wave, and neo-soul, all produced quite earnestly, as if they were afraid they might disrespect their soul
ancestors if they didn't get it just right. Given that London is affiliated with producer Mark Ronson, this
is not surprising.


The mixtape opens with a smooth eponymous track I could easily see as a concert opener. Theophilus
London gives us a spoken word cadenced rap over a smooth electric piano riff sampled from "Le Soleil
Est Près De Moi" by Air, which sounds like a riff that Kamal of The Roots might play. Jesse Boykins III
follows with earnest pleading vocals halfway in, "take me out to here/and finish girl." Then about 3:00
in, they shift gears (a recurring theme) to a soft dubby beat and the chorus of "Back in the Day."

Overall, Jesse's instrument is just a joy to hear. He invokes phrasing reminiscent of New Birth,
early Chicago house, and the obvious Dwele comparison in a blissfully effortless blend. Theophilus'
wordplay is real, raw, and has a people's champ vibe to it. He speaks for the everyday listener, not a
style, clique, or record company. My only complaint is that he occasionally lapses into Jay-Z phrasing that
is a very obvious and as such very annoying. On the innovative, yearning of "Cold Pillow" he (ah-ah),
inserts so many (ah-ahs), that it is (ah-ah) hard not ( ah-ah) to think your iPod skipped to Jay's "American
Dreamin" by accident. Boykins smooth clear chorus "and I wonder/the strangest feeling is taken me
under/...now you've taken chunks of me" helps take your mind off of it. There is a remix by Machine Drum included in this
compilation as well. Later, tracks "Humdrum Town" and "No Answer" will make you think you're listening to '80's new wave
synth groups, but in different ways. "Humdrum Town" has a working-class angst "I gotta get out of this town"
theme, and is laced with electronic drums and industrial keyboards reminiscent of Crowded House
or even UB40. The hook is kind of an underutilization of Boykins' voice, but he gives it a good effort
anyway. "No Answers," London's frustration at solving a relationship problem, plays out on danceable
handclap rhythms and punchy synths on the order of Level 42, Human League, or Scritti Politti. He
makes clear he's seeking the truth, when he tells his girl "I don't need you to love/I need you to listen."

The star of this mixtape's show to me is, "Sorry to Interrupt." The story plays out like a modern
day "Excuse Me Miss," with London noticing the quirky combination of "penny loafs, shoulder pads"
on his intended target at the club and tries to approach without risking rejection -- or commitment. Here
the soul melting pot blends together perfectly -- you could play this in a reggae, Chicago
House, or even a salsa set and it would fit in perfectly in each. London gives us a charmingly off-key, ska-sounding hook. This is followed by "Enjoy the Sun," which you might be inclined to hit the next track button on,
but don't. At about 1:50 it shifts into this funky ragga break for a minute or so (DJs take note), then
shifts into funkier still keyboards under the chorus that took me back to '80's British soul/dance group
Imagination. It seems London's flow hits its stride here, and I'd have liked to have seen that same level
of effort on every track. Progressive/indie rap darling Blu makes an appearance on "Life of a Lover" and
fits in well without stealing the show.

Paris 96 closes out with a solo track from each artist. Boykins' offering, "B4 the Night is Thru," makes
you want to sip a crisp, cold Pinot Gris on a terrace overlooking the water in Italy somewhere. (Yeah,
I just saw the Entourage finale, but still.) Again, Boykins' Chicago roots show up in the structure and
delivery of this track, most notably because the beat is perfect for Chicago steppin'.

Paris 96 is a mixtape you should use as a soundtrack for a beach trip, road trip, picnic, or party.