Kid Creole And The Coconuts Come Back ‘Screaming’ 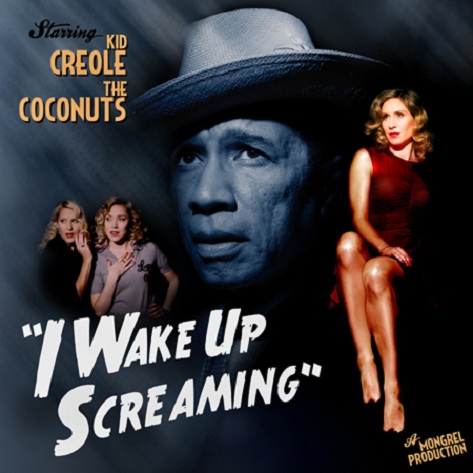 At times Kid Creole and the Coconuts' I Wake Up Screaming seems like listening to a cast album for a Broadway show you've never seen, and that's a good thing. Most songs could stand on their own, but it still feels like something meant to be heard all in one sitting. August Darnell (aka Kid Creole), takes pages from his '80's heyday and runs them through the scope of today's perspective, usually to solid results. When the album is focused, the songs are all productions within themselves, each providing its own scenery and cast of characters. When that focus is lost, however, the results can be less than stage-worthy.

Our journey begins with the biographical "Stony and Corey," a tale about the beginning and end of Dr. Buzzard's Original Savannah Band, of which Creole was a part of along with the titular Stony Browder and Corey Daye.
Firmly rooted in Dr. Buzzard's style, it's the perfect intro to the
album as many songs take on the same sense of storytelling (and, at
times, autobiographical nature). Darnell gets back into his usual Kid
Creole character for "I Wake Up Screaming (In the Tropics)," a funny,
raunchy song (the Coconuts sing "titty" and "booty" over and over at one
of the song's more hilarious points). Sadly, these two great songs are
followed by "Somebody's Got to Lose," which is a throwaway of a song if
ever I've heard one. "I Do Believe" tries to pick up some of the
momentum that "Lose" lost, and actually succeeds due to constant pace
and Creole's fun lyrics. It could easily stand next to some of his '80's
work.

"Long Live the King" is another song that the album could've done
without, though it's not as bad as the previous offender. Still, it only
serves as an obstacle to get to the sweet spot that is "Verily Verily
Verily" and the following "Tudor Jones." "Verily" is a calypso romp that
showcases the interesting grit to Creole's voice while "Tudor Jones" is
a touching ballad that takes that same voice to lovely heights. The fun
continues with "Attitude," a Prince-ly tell-off, "This Is My Life," and "We're Rockin Out Tonight." "Rockin" is especially great to hear in context of the album, as without the surrounding songs, it seems much flatter.

"Love Remains" is sweet, but kind of boring. If the far superior "Tudor
Jones" hadn't been included, then it might've passed muster, but it
simply pales in comparison. Luckily, "Blow Me Up" and "Just Because I
Love You" swoop in at the end and save the day. "Blow Me Up" wins mainly
because of its pulsing groove as Creole tells you what exactly he
brings to the musical table and why many people should give him some
due. "Just Because I Love You" brings the album full circle with a sound
similar to that of "Stony and Corey," yet a bit more lush.

Though it definitely has its missteps, I Wake Up Screaming
finds Kid Creole returning with a sound and sense of fun that seems to
have never left. He might not be the same artist he was in the '80s, but
he still knows how to craft songs that have a groove and flair all
their own and a record that is fun and cohesive.

Kid Creole and the Coconuts I Wake Up Screaming [Amazon][iTunes]