Maimouna Youssef Is ‘Blooming’ On Her Debut Album 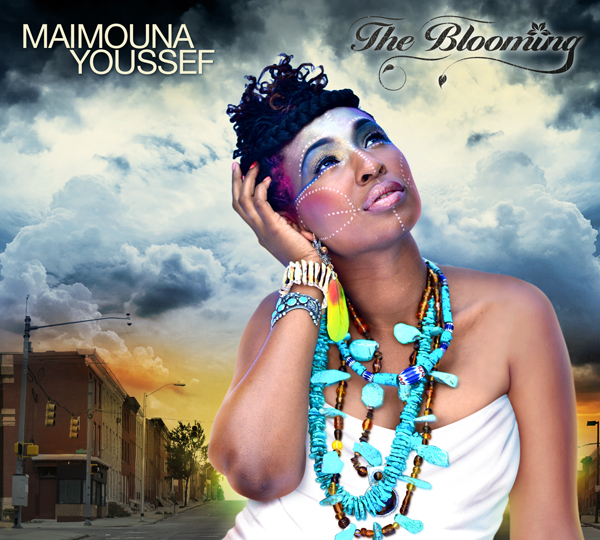 Cast your minds back to 2006, and The Roots were gearing up to release their seventh studio album, Game Theory. Always known to lean towards the soulful side of hip-hop, the first single "Don't Feel Right" had all the ingredients of a smash hit -- on-point rhyming courtesy of Black Thought, a storming, soulful beat laid down by ?uestlove and the gang, and one of the catchiest killer hooks in recent memory performed by little-known vocalist Maimouna Youssef. Her performance with with ?uesto and co. led to an appearance at Dave Chappelle's much celebrated Block Party, but that was the last we heard from her.
Center

Fast forward to 2011 and Maimouna is now ready to release her debut album, The Blooming, to the masses. In the last five years she has had a child, performed extensively around the DC area and beyond, and released a handful of material including the Black Magic Woman EP, which dropped earlier this year. The songs on The Blooming are a mixture of the old (I used to blast "Gypsy Woman" on her MySpace page) and the new and cover ground including but not limited to soul, blues, jazz, hip-hop, reggae/dub, spoken word, and even a trace or rock here and there. Yes, the album is an eclectic beast to say the least and that can be both a blessing and a curse on a debut album. For every person who praises an artist's willingness to experiment and try out different genres/sounds, there will be another who argues that said artist doesn't have a clear direction, doesn't know who they are. Well, after listening to the album on repeat for the last couple of days, I'd be inclined to agree with the former.

As already established, Maimouna isn't afraid of taking a risk and she jumps straight in, introducing the listener to her MC alter-ego Mumu Fresh on the Zap Mama-assisted title track that opens the album. Now I'm no authority on rapping skills, far from it, but to my ear at least it seems that Maimouna knows what she's doing. The track acts as a kind of extended intro, setting out Maimouna's mission statement with lines such as "I came into this round to do things a little different. If you love it or you hate it I'm gon' stay persistent. I am what I am, effortlessly relevant." After a solid dose of hip-hop, juke-joint blues is up next with the irresistible "Black Magic Woman," and then it's on to straight up soul for the official first single, "I Got A Man."

"You Ain't Hard" (which was also featured on the Black Magic Woman EP) combines Maimouna's singing and rapping skills as she goes in on current hip-hop artists who hold style over substance with lines such as "You aint what you say, spitting that s--t you all sound the same. Please stop lying to me and gimme something I can feel inside of me." It's not all cussing them out, though. She acknowledges that some folks need to do it in order to get paid and to "support her Remy and her fake nail habit, drinks in the club, keep her dressed the baddest." The next three tracks display yet more of Maimouna's eclecticism, with a reggae vibe morphing into free-form jazzy soul and back again on "When The Music Breathes," '60's girl-group R&B harmonies (complete with a Diana Ross & The Supremes' "Ain't No Mountain High Enough" sample) on "Reason For Breathing," and a laid-back Latin beat on "O Encontro No Brasil (Meet Me In Brazil)."

"Gypsy Woman," a female empowerment anthem for those that can't deal with "Single Ladies," opens with Maimouna cooing over a jazz piano, which, with the addition of some fine guitar work, quickly builds up pace towards the bridge and chorus, transforming it into soulful rock, only to be pulled back to its jazz piano beginnings again. This to-ing and fro-ing between styles works extremely well, making "Gypsy Woman" the standout track on an album potentially full of them. A spiritual spoken word poem, "The Knowing," follows next and would usually sound a bit out of place if it were not for the concoction of sounds that we have been exposed to so far. "Reach Into Your Mind" is Maimouna's take on a slightly more progressive soul sound and is, in addition to the poem which precedes it, the only song not written/co-written by her. "Wake Up" is a warning, and a controversial one at that, on the dangers of trusting in the government, touching on issues such as Hurricane Katrina, drug and vaccination control, and the addition of fluoride to water supplies, whereas "Thank You" brings things down a few notches for a beautifully mellow acoustic closer.

To try and sum The Blooming up in a few words is an impossible task. Touching on so many sounds, styles, and genres makes it hard to classify and therefore a risk, but thankfully a risk that certainly paid off for Maimouna and for her listeners. In what has been a pretty solid year so far in terms of releases, especially debut albums, The Blooming will stand proud amongst them, potentially making it onto a few "best of" lists come year end, if the PR machine works in her favor.