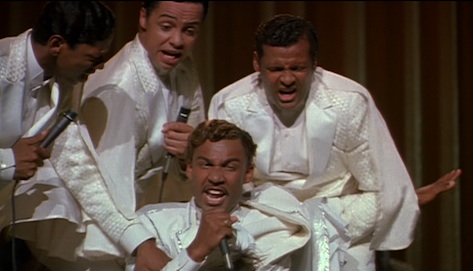 If you stan as hard for the movie The Five Heartbeats as much I do, then this collaboration between 9th Wonder, Terrace Martin, Phonte, and Bird and the Midnight Falcons, one of the fictional groups from the flick, on "One Night" may just have you squirming in your seat like the character Cookie in the talent show scene. But as it turns out, Bird and the Midnight Falcons aren't actually included and their song "Baby Stop Running Around" isn't even sampled on "One Night," but 9th tacked them onto the track as a comedic gesture. Clearly the man has jokes as well as production talent to spare, which will be on display on his long-awaited new album, The Wonder Years, finally dropping on September 27th. As the date rapidly approaches, we've been getting tastes of the album's honey here and there, and this is by and far my favorite yet. The two-step worthy groove starts with that needle-on-the-record sound and 9th Wonder scratching before Terrace sings with a little Vocoder assistance before passing the mic to Tay who contributes a few bars. The throwback vibe continues with Terrace talking to his lady on the breakdown then playing a saxophone on the bridge with Phonte channeling Marvin Gaye on ad libs. It sounds like there's a lot going on, but is comes together in a hearty gumbo of goodness. Bird would be proud.
Center


TAGS:  9th wonder, audio, bird and the midnight falcons, marvin gaye, phonte, terrace martin, the five heartbeats
Previous: Abimaro & The Free Have Something To ‘Boast’ About Next: Get Lost In ‘Transit’ With Robin Hannibal