What The Game’s Been Missing: Wedding Songs 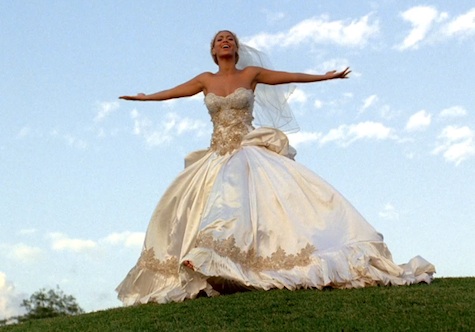 A couple of weekends ago I attended one of the most beautiful wedding ceremonies I have ever been to. No, it didn't have angels with harps hanging from the ceiling like a scene out of a Tyler Perry fantasy movie. Instead, it was simple and full of love. The bride glowed with excitement, and the groom cut a handsome silhouette next to his best man, who in this case was his twin brother. The bridesmaids and groomsmen were smartly dressed while family and those in attendance sat back and used the wedding programs to fan themselves in the warm church. Unlike most black functions, this one started on time. (Seriously, I've been to a wedding that started four hours late. FOUR HOURS!!!). It was beauteous.
Center

Later, the reception was popping. I obliged myself to a number of pre-dinner hors d'oeuvres, filling my face with all manners of scallops and crudités, thankful that I had worn a dress that allowed me to expand without hurting my stomach too bad. And the buffet? Even the thought of its ample portions and delicious morsels make me weep with joy to this day.

After a few drinks everyone cut loose and got on the dance floor, which leads me to the main point of today's essay: the wedding playlist determines how the rest of the reception will go. Luckily for me this was a classy affair, and the only hubbub came from the groom and his frat brothers stomping the yard in their tailored suits. When people get revved up on rum and memories of the good old days, the choice in music can be the difference between doing the two-step with Aunt Trudy or getting hemmed up by Uncle Randy and his brown liquor cocktail.

I also realized during the mother-son dance that there hasn't been a good "mother" song since "Mama" by Boyz II Men from Soul Food. Come to think of it, "My Girl" by The Temptations, "Dance With My Father" by Luther Vandross, and "Isn't She Lovely" by Stevie Wonder are the only father-daughter songs that seem to fit, and none of them are new. The only area where there's been any movement, literally and figuratively, is in line dance music where we've segued from "The Electric Slide" to "The Cupid Shuffle," but even that is getting worn out.

Have musicians completely given up on making music that reflects the depth and beauty of black love? You can't slow groove to Lil Wayne's "She Will." I mean technically you could, but it would make you, you know, sort of a hoodrat. Not that there's anything wrong with that, but just know that if a video of your reception ended up on World Star Hip Hop, don't say I didn't warn you.

But all of this is to say, where is all the wedding music? And I don't mean songs that are in one year and out the next. I'm talking about enduring hits that make you want to hold your dearly beloved close on that first dance as husband and wife or want to boogie oogie oogie when celebrating holy matrimony. Better yet, what makes a wedding song good? Weddings are the toughest parties to plan: you need a mixture of meaningful songs for those important moments, upbeat music, and slower tunes so attendees young and old can get their party on while partaking in festivities. Sure, having the right DJ who knows music and has deep crates helps, but can said DJ get a few more songs to add to their repertoire to spin, please?

What do you think about the lack of wedding jams, Bouncers? What songs did you or would you use for your own weddings?