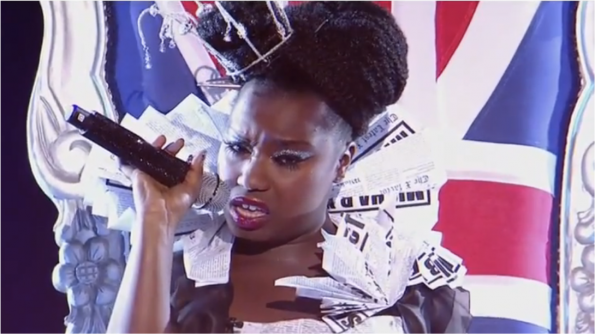 Although I've yet to catch it on TV, it seems that the US version of The X Factor has been wowing audiences on both sides of the pond. However the UK version, now in it's eighth season, has so far proven to be pretty underwhelming, with most of the talk surrounding the judges insistence to meddling in the group line-ups and their "shock" decision to give four contestants the boot during the first live show. All that aside, the reason most of us watch these shows is to view the talent (or lack thereof) on display, and although talent seems to be pretty thin on the ground in this year's UK version there is one lady who, for me at least, stands out from the crowd. If you can look past her sometimes questionable attire, and occasional bad singing habits, then Misha B may have what it takes. Her first audition saw her tackle talent show staple "Respect" with a gutsy attitude and a very competent rap, impressing all the judges and Kelly Rowland in particular. Fast forward through the various stages of whittling down numbers and Misha ended up in Kelly's group performing a cover of Adele's smash-hit "Rolling In The Deep," again with added rap. Judging by my Twitter timeline on a Saturday night opinion on her is divided, so I'll put it to the SoulBounce faithful: does Misha B's talent run deep?

[NOTE: Apologies, but ITV has disabled embedding of all The X Factor UK videos, but the links are above.]
Center


TAGS:  kelly rowland", Misha B, X Factor
Previous: Morning Soul: I Like To Write But Then Again Some Bite Next: Bounce-Worthy: Antoniette Costa