Get Your ‘Boogie’ On With Tokyo Dawn For The Second Time 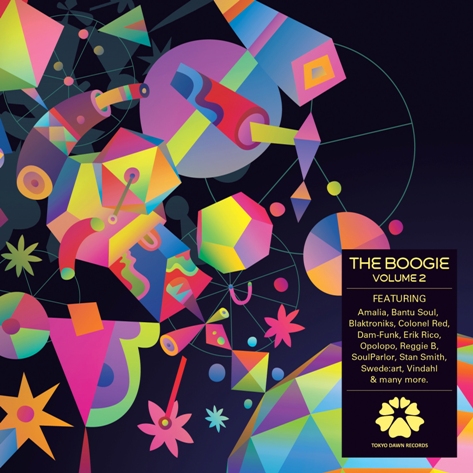 Yes, it is that time again: the great folks over at Tokyo Dawn Records have released yet another compilation for our listening pleasure. A follow up to last year's The Boogie Vol.1 (and a great companion piece to The Heart Vol.1 & Vol.2), The Boogie Vol.2 delivers the latest cosmic soul and future funk in a neat yet comprehensive package. The album features contributions from the TDR stable, including Opolopo, Amalia, Vindahl, and Colonel Red, as well as SoulBounce favorites Erik Rico, DaM-FunK, and Reggie B. A surprise, but very welcome appearance from Platinum Pied Pipers collaborator Karma Stewart on Psaul's "Slow Dancing" is a definite highlight, as is the Opolopo remix of Tomson & Benedict's "Blind," which features Bantu Soul on vocals. The album isn't officially released until November 21st but, as always, TDR have made a digital-only pre-release available now. What are you waiting for? It's time to get your boogie on!
Center