Phonte’s ‘Charity Starts At Home’ Shows Where His Heart Is 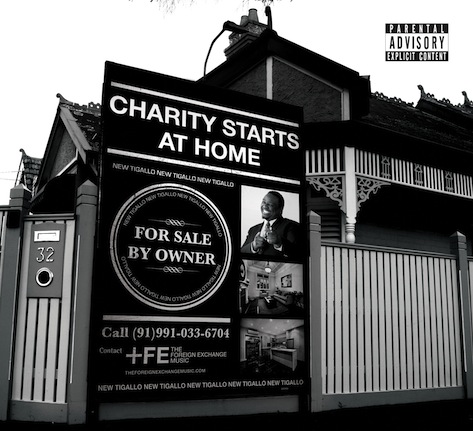 "New Tigallo! New Tigallo! New Tigallo!" is a clarion call for Phonte lovers the world over, and Mr. Coleman has outdone himself with the release of Charity Starts At Home, his first full-length solo project. Newly reunited with spiritual (and musical) brother 9th Wonder, Phonte serves up a solid album that you will enjoy from start to finish. But let's be clear -- this is grown folks music; the type of music you clean the house, two-step with your boo, fold laundry, and have a glass of wine to. And like wine, this album should be savored. Too often we writers rush to give an opinion on music when it hasn't settled on our spirits yet. This time, I decided to let Charity marinate.

Phonte pulls no punches in his music. He tells the truth whether it is about relationships, the music business, or making money (or all three). His lyrics are well-crafted and often comedic, which gives him the everyman vibe that resonates with so many fans. "Not Here Anymore" featuring Elzhi is reflective without being depressing. Some of his lyrics are visceral, making you feel them in your gut, like: "The denizens took over the big house on some Nat Turner sh-t/shoulders back, head tied to the f--king firmament." You envision his dogged determination to get ahead, and the spiritual connotation of the word firmament made me feel there was some divine purpose in his music.

"Sending My Love" starts off with a samba-ish beat, and here we find the playful Phonte from The Foreign Exchange's crowd-pleaser "Take Off the Blues." He spits real talk about the challenges of commitment, and this honesty can cut to the white meat for those of us in the throes of relationships. My favorite lines: "I know single men that will kill for a home cooked meal, I know married men who would kill for a quiet house," (true) and "Martin Luther King ain't die for you to be trickin' off on hoes," (very true). By the end of the song you are hoping against hope that he makes the right decision and goes homes despite the tantalizing temptation that is presenting itself to him.

The focus on the claustrophobia of long-term relationships continues with "Ball and Chain." You can tell just based on the level of soulful croonage in this track that Phonte has really grown as a singer. There is a forbidden sensuality lurking in his voice as he describes the golden handcuffs of having a "good" man or woman. The grass always appears to be greener on the other side when you don't have to cut it.

"Gonna Be A Beautiful Night" featuring Carlitta Durand was another enjoyable track. Carlitta's voice is so feathery and beautiful and, well, dreamy, that it made me want to stretch out on my stomach and kick my feet while blowing dandelion seeds off the stem. I wanted to hold somebody's hand and swing it back and forth or spin around in a meadow catching snowflakes with my tongue. That's how happy her voice makes me feel. This song was also the ladder that allowed me to climb up out of my feelings after listening to the realness of "Ball and Chain," and it restored a sense of balance to the album.

Phonte wraps up the 12-track collection with "Who Loves You More" featuring SoulBounce fave Eric Roberson. He examines generational relationship curses, family dynamics, and the motivation for achieving one's dreams in one fell swoop. He also thanks God, simply and powerfully, which is a great way to go out.

There's a lot more I could say about this album, but the long and short of it, though, is that it's a good record, and each song fits into the next to create a holistic listening experience. The guest appearances aren't overpowering, and Phonte gets some of the dopest artists in the game right now (in addition to the aforementioned, Big K.R.I.T., Evidence, and Median guest) to take part in his creation. This was truly a journey into Phonte's home -- and, ultimately, his heart.