What The Game’s Been Missing: Dancing Rappers 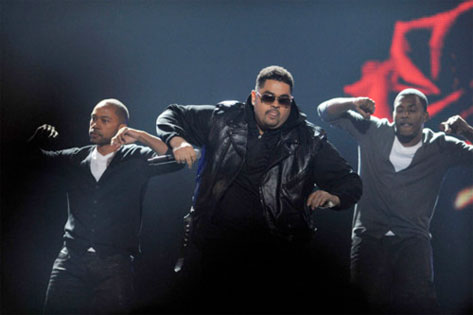 Apparently the best part of last night's EBT BET Hip Hop Awards '11 was at the end of the show, when the only slightly-overweight lover Heavy D broke it down with a four-minute medley of his certified jams. And since I was too busy watching a Lifetime movie to see it live (don't judge me), as soon as I got in the office I cued up the video.

Heavy D looked trimmer and fitter than he was in the '90's, clad in a black Northface-type of jacket and jeans. And he was dancing. Not leaning with it, not rocking it, but getting it in. Even though I only had four hours of sleep last night, seeing Heavy D get funky had me pumping like Rosie Perez at my desk. The only thing that tripped me out was the fact that the clearly younger audience didn't know how to react to a lyricist with smooth moves (and a bigger dude, old enough to be their father in many cases, so light and nice on his feet). I wanted to collectively smack the audience and scream "It's hip-hop, you DUMMIES!" for them not knowing how to participate in such a dope performance.

It appears that R&B dudes Chris Brown and Usher have the dancing while lip-synching singing game on lock, and it's about time rappers started to get back into the habit of doing two things at once. Dancing is one of the four elements of hip-hop, and I'm tired of watching artists like Big Sean spit struggle bars without the ability to rap and walk without running out of breath. You rap slow anyway, you could throw a little Diddy Bop in or something to keep us entertained. (Hint: your lyrics ain't cuttin' it.) And for those who think it will mess up your credibility, you only need to look to the ghosts of hip-hop past.

Many great lyricists were also in possession of seriously smooth moves. There's a certain devil may care attitude they give off, like "Yeah you see me doing the running man and the wop, but you know what? I'm still a thug." Take Tupac, for instance, who for a long time was a backup dancer for Digital Underground. He was not swayed by the prospect that his Gumby haircut and energetic jumps would cause people to give him the side eye. He was confident. He was strong. And I bet all that jumpin' and humpin' around gave him the stamina he needed to put on a truly live live show.

All we have nowadays is the Cali Swag District whose "Teach Me How To Dougie" is hardly cardiovascular workout like Big Daddy Kane, Scoob, and Scrap Lover or Heavy D & the Boyz did back in the day. Last night the Heavster may have been without his Boyz, but his choreography and ability to rap and dance simultaneously was equal parts sexy, dope, and fun. I had nothing but love for him, baby, and I bet he could teach these younger hip-hop whippersnappers a thing or two, too.