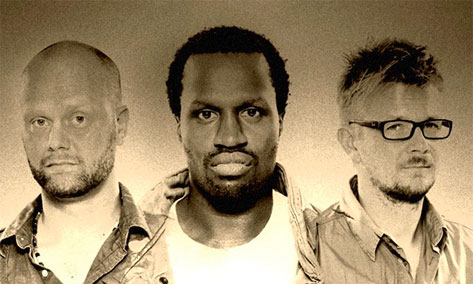 Sometimes artists just need to spread their wings. Switch it up from time to time. Let their hair down, if you will. There's nothing wrong with keeping it fresh and keeping the audience on their toes -- as long as you do it well if you do.

Danish soul man Jonas is well aware of this and together with rapper Kuku Agami and producer Daniel Fridell, they brought their various musical styles together to create the group Sweatshop. Jonas' butter-smooth voice is the perfect foil to Agami's rapping over Fridell's productions that range from soul, to hip-hop, to reggae. Together since 2007, the Copenhagen-based trio have two projects under their belt with the five-song EP, The Getaway, just released this week.

With only five songs, there was no room for error and Sweatshop make no mistakes with their song and sound selection, giving listeners a little bit of everything on songs like "Get Away" and "I Wanna Know" with their strong reggae soul vibes over different tempos. You'll want to jump around then slow wine. The last two tracks, "Rainbow" and "Jungle Fever," switch the island stylee up with hip-hop soul grooves. To accompany the EP's debut, they dropped the video for the lead single "Drug." It totally makes sense that Sweatshop would have a song about being addicted to someone because after one listen you'll be hooked on them, too.


TAGS:  audio, Daniel Fridell, jonas, Kuku Agami, sweatshop
Previous: ‘Will’ You Say ‘Yes’ To This New Electric Empire Track? Next: ‘So’ What Do You Have To ‘Say’ About Mateo’s Video?