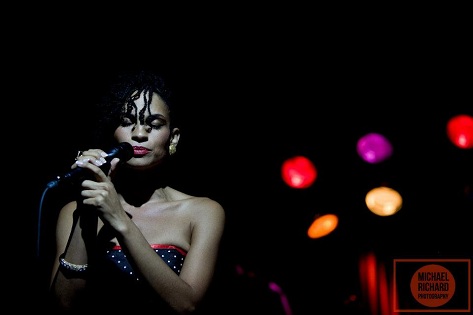 The last time the public at large had heard from Goapele was her second album, 2006's Change It All. In between then and now, she released buzz single "Milk & Honey" in 2009, but no album materialized. Until now, that is. Break Of Dawn, which is possibly Goapele's best album since Even Closer, was finally released, so to celebrate she held an album release concert at NYC's B.B. King Blues Club.
Center 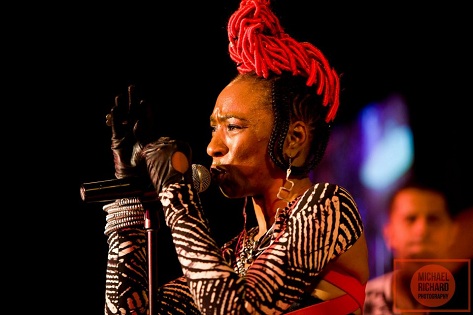 Hosted by radio's own Lenny Green, the event kicked off with a set by the vibrant stylings of Wunmi and Slow Commotion. Wunmi was in high gear for most of her set after coming out shrouded in sheer, silvery jacket that she quickly tossed aside to reveal a zippered bustier and a funky black-and-white print outfit. Dancing and writhing like there was no tomorrow, she delivered her mix of political dance music and commanded the crowd's attention. Songs like "Crossover" and "Talk, Talk, Talk" filtered the political fire and groove of Fela Kuti's work through a more modern style, muting it a bit but still retaining the verve. Still, her performance's defining moment was during "Fit Body," a hyper-kinetic number about shaking that yanch (as Fela would say) like it's going out of style. Wunmi walked from the stage and into the crowd, her bright red twists standing tall atop her head, and proceeded to have a dance-off with at least five members of the audience as the crowd clapped along. A slightly winded Wunmi got back on stage after and delivered her moving final song before bidding adieu and singing her way off stage. 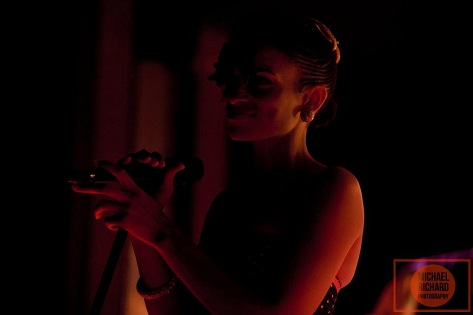 It wasn't long before Lenny was back on stage to introduce the woman of the hour. After her band played the familiar intro to Rick James' "Mary Jane," Goapele pranced onto the stage in her polka-dotted dress. Being that it was her album release party, she featured Break Of Dawn heavily. Our first sampling of the album that evening came in the form of "Undertow," a song about the just how consuming a bad love can really be. She served up more Dawn with the heartbreaking "Tears On My Pillow," the tender "Hush" and the sultry "Play." Her performance of "Money" included a special surprise, as its slinky groove morphed into Prince's "If I Was Your Girllfriend." Though she flubbed a bit of the lyrics, Goapele didn't shy away from the funk of it all, showing out and having fun on the stage.

Of course, she didn't forget about her older hits. "Romantic" and "Closer" both got played, though not in the exact forms as they've previously appeared. "Romantic" was fused with Bootsy Collins' "I'd Rather Be With You" seamlessly. "Closer" received a similar treatment, with Goapele and her band tacking "Everybody Loves the Sunshine" on towards the end, even letting her keyboardist get in a rousing solo that moved the crowd. For her rendition of "Different" she led off with a brief speech about the Occupy Wall Street movement, acknowledging her own activist roots. First singing a bit of "A Change Is Gonna Come," her beautiful rendition of "Different" came next and flowed just as beautifully as the first time I ever heard it. 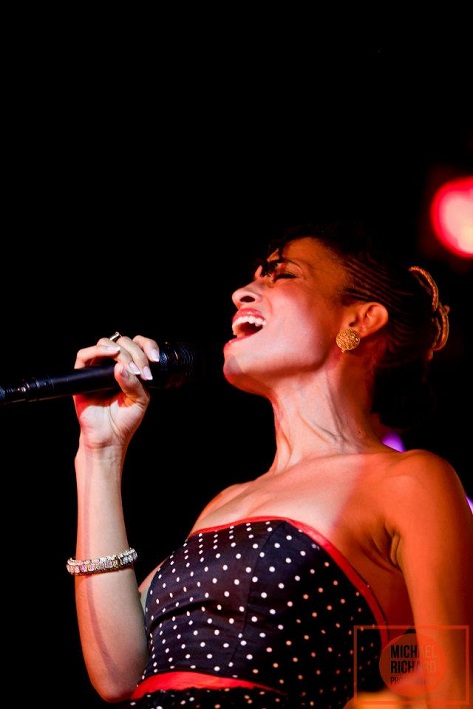 For her encore, Goapele pulled "Sweet Thing" out of her bag of tricks. When she realized that the crowd wanted to sing the song just as much as she did, she gave in and let it be a sing along, picking up the mic to hit the chorus. She took back control for the final song of the night, the sassy "Love Me Right." The crowd followed the song's command as she exited the stage, giving Goapele her biggest applause of the night.


TAGS:  bootsy collins, fela kuti, goapele, rick james, Wunmi and Slow Commotion
Previous: Robert Glasper’s Idea Of ‘Black Radio’ Sounds Perfect To Us Next: What Does Eric Benét Have To Say In This Q&A?