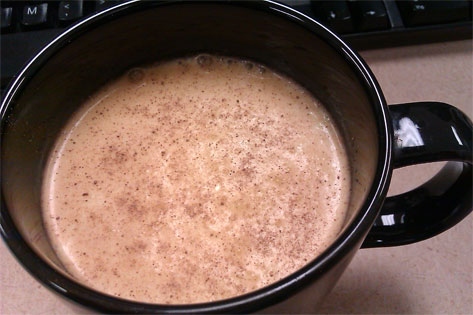 It's sweet, smooth, and rich and a tradition in many households over the holiday season. The soothing aroma and subtle flavors permeate the atmosphere with an abundance of ambrosial goodness. I'm talking about the beverage that's been mused over and serenaded for decades: the classic egg nog. Every nog has its roots deeply entrenched in the traditional recipe of eggs, milk, sugar, and vanilla. Just like a good nog, every good seductive soul ballad is birthed from a familiar formula of deep bass riffs, suggestive lyrics, and soothing vocal syncopation. No one embodies this more than Ms. Jill Scott on the ever seductive "Crown Royal" from her third album, The Real Thing: Words and Sounds, Vol. 3. Her delectable vocals teamed with the alluring track is reminiscent of a nice cup of bliss on a crisp winter's night. Adding a little Crown Royal whisky to the traditional egg nog recipe and giving it a Southern twist will definitely warm you up much like Jill's velvety smooth voice and the heat rising from this song. For tasty tidings of joy, you can't go wrong with Uncle Mo's Creole Crown Royal Egg Nog this holiday season. Cheers!


In a large mixing bowl, beat egg yolks until they are thickened and light. Gradually stir in condensed milk, sugar, vanilla, cayenne pepper, and milk. In a seprate bowl, beat the egg whites until stiff, then add them to the egg yolk mixture. Stir Crown Royal into the mixture to taste. Garnish with nutmeg and cinnamon. Keep refrigerated and served chilled.