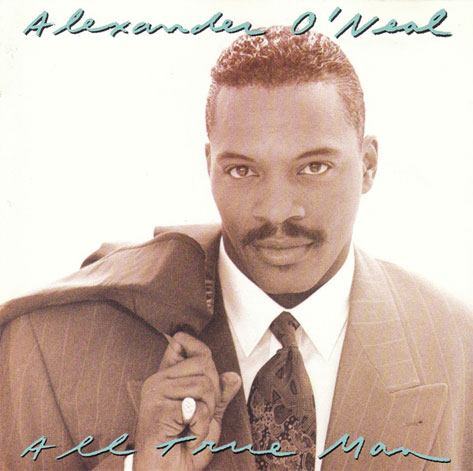 In 1991, where live music was dead outside of jazz, and R&B was looking a lot more like pap music, the leading man was as rare a find as two-parent households in a post-Reaganomic Black America. Alexander O'Neal, with only Luther to consistently help him out, was one of the only big brown men on radio or video who wasn't rapping. Alex's rich tenor, commanding 6'2" presence, and the street cred of being too black and too hard for Prince, gave him his own "thing." While Billy Ocean, Jeffrey Osborne, and Lionel Richie were also anti-Prince/DeBarge/Michael Jackson saviors of black masculinity, but "Get Outta My Dreams, Get Into My Car," "She's on the Left," and "Dancing on the Ceiling" might have been a tad over the top, if not unforgivable sins. He was one of the first singers of my generation I wanted to sound like when I was a grown man.
Center

Following up the immensely popular Hearsay was the grown answer to Ralph Tresvant's "Sensitivity," "All True Man," ironically composed and produced by the same duo, Jimmy Jam & Terry Lewis. As if to say Tresvant's smash was for the younger audience (or battered women), O'Neal's third album of the same name was very much needed and well received in an age where the strong black males on display were either fighting the power or the police.

R&B's overly programmed and processed fad as of '91 impales the first six tracks (or side A) of the album. Sometimes trying too hard to fit in my dorm room shuffle with BBD, most of the tunes hit a temporary mark, but the songs don't stick for long. Save for Alex's confessional, "The Yoke" and "Every Time I Get Up," there's nothing remotely close to "Fake" and we're mostly looking forward to the ballads. An attempt to recreate "Criticize" from Hearsay wraps the way too busy beats and that's where the album becomes something else. The title cut begins a succession of the magic that is Jam, Lewis, and O'Neal. "Sentimental" is an emotional and sincere hearkening to family values, blessed by a lush arrangement and Karyn White. "What is This thing Called Love" is a dance jam that conveys what the first side was missing.

The ending's string section hints at what affluence Jam & Lewis' success have now afforded, whereas the previous album could only deliver in keyboards. "The Morning After," follows in Hearsay fashion and kept Alex alive on Quiet Storm formats. "Hang On" is the most stellar of the ballads, produced by Lance Alexander and Tony Tolbert, soon to be known as the sole architects and members of Lo-Key?, the sentiment, arrangement, and instrumentation (featuring The Time member, Jesse Johnson) are the polish of Hearsay, but a contemporary-appropriate sound that rounds out this new decade version of Alex. With this album being Jam & Lewis' last production of their former band mate, "Hang On" would be the validation of why Alexander and Tolbert should be the lead producers on O'Neal's next album. That decision was also made based on Jam & Lewis newly acquiring their own label and being too busy to deal with anything "extra," which often came with recording O'Neal. This "extra-ness" (see TV One's Unsung) and slower sales on his following album ultimately retired the man once big enough in the UK to sell out Wembley, to rare small-room venues over time.

All True Man wasn't the perfect album package of Alex's previous work, but it was just as, if not more important in black male artist contributions to music in a time when brothers were really searching for who to emulate.