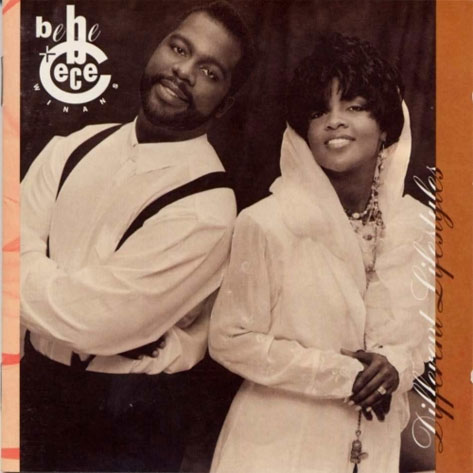 It's odd how some albums or songs find us. How we get thrown into situations, meet certain people who lead us to discover sounds that we would've never thought to tune into. It may sound like I'm about to spin some Twilight Zone-esque tales, but think about those odd moments where music we were meant to enjoy just seemed to seek us out and stick like cling-wrap. The time embroiled in higher eduction proved to be when my music library grew to hard-drive erupting capacity due to such musical discovers through the many acquaintances I made in that five-year period. One musicology moment occurred with my first proper introduction of brother and sister duo BeBe and CeCe Winans by way of their cross-over contemporary gospel stunner, Different Lifestyles.
Center

To make a long horror story short, I had had an altercation with a roommate who was akin to "Rosemary's Baby" or "Damien: The Omen" if you will. In the end, I was reassigned to room with -- and here's the "isn't it ironic" moment -- a really sweet girl who had gospel and inspirational music wafting in and out of our dorm room on the daily. Talk about spiritual purification. Curious as I always am when it comes to the sound of life, but not fully engaged in religious music, she got me started off on a Gospel 101 class right there in our cramped dorm room. So I went past my usual playings of Aretha Franklin's 1972 classic Amazing Grace record (the sole gospel album I owned at that time -- I know, I'm such a heathen) and the hand-clapping songs I sorta kinda memorized during a stint in junior church choir during my youth. She got me started off on the basics -- Mary Mary, Yolanda Adams, Kirk Franklin, and of course, the unprecedented Winans family.

In these bushel of albums that were introduced to me there was Different Lifestyles. She started me off on the right track, as far as BeBe and CeCe go as Lifestyles is a cream-of-the-crop inspirational album that managed to gain the siblings multiple awards (including a Best Contemporary Soul Gospel Album GRAMMY in 1992) as well as four hit singles, and looking back, paved the way for contemporary gospel records to extend to an audience who didn't always flock to the inspirational market, but wanted a little pick-me-up whenever their spirit needed to be uplifted.

Uplift Lifestyles does, yet this time the Winans broaden their scope and bridge secular and religious with the utmost class and groove. Tapping into the New Jack Swing vibe of the time, Lifestyles messages deliver the word but make it highly accessible. This is thanks in part to producer Keith Thomas, who was responsible for Amy Grant's glossy crossover duo of albums, Heart In Motion and House Of Love, from the '90s. In a similar attempt, Thomas, along with producer Rhett Lawrence and other members of the Winans clan, provide the siblings with densely searing and well-constructed material that boasts BeBe and CeCe's robust vocals and spreads the word, but in a non-sermonizing way.

With its message of devotion to the higher power "Addictive Love" is the key track for this album as it shot to the #1 slot on the R&B charts and no doubt received heavy rotation upon its release. BeBe and CeCe's energy is easily absorbed by the listener and like the title suggests it's addictive. Easily it's my favorite moment on the album. Still this isn't the only show-stopper. The roll-licking opener, "Depend On You," and the sun ray determinations of "Better Place" and "Can't Take This Away," which the latter has an interpolation breakdown of "He's Got The Whole World In His Hands," continues you to ease on down the road in happenstance. The Winans celebrate another famous musical family, The Staples Singers, giving their classic "Take You There" some justice as it's given a funky jump start and potent arrangement that also features a rousing Mavis Staples in a welcomed guest spot during the breakdown. MC Hammer was hot in the streets around '91, and he pops up on the funk-a-thon "The Blood," dating the song a tad, but his energy cannot be denied as is Miss Whitney Houston who makes a blink-and-you-might-miss appearance on the track. The richest moments are the stirs of introspective testaments such as "Searching For Love (It's Real)," which is fully BeBe in the vocal spotlight and it's a soul-stirring performance that really captures the listening ear. The same can be said about "I'm O.K.," which deserved its hit status based on the consoling lyrics that speak of better tomorrows after getting through today's storms.

No room for negativity is laced here, as Different Lifestyles wraps around with a warmth that is genuine and headstrong all the way when the last chord chimes, and it's that melodic support that is needed every once in awhile whenever things don't always seem so crystal. What can be applauded about Different Lifestyles beyond it's uplifting messages and wonderful vocal spreads is that it does do what music is meant to do -- transcends beyond its core audience and brings those who might not be within the circle in, never excluding and always with the groove in mind. It's a gift to be shared again and again, and that is something you can really give praise for.