SoulBounce’s Class Of 1991: Jody Watley ‘Affairs Of The Heart’ 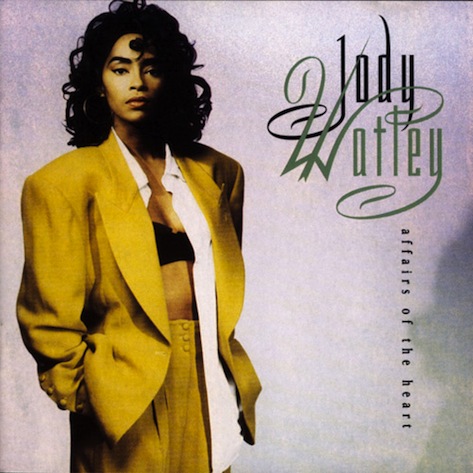 Do people still say "fierce"? Or have we placed the word into a retirement home for inactive overused words since 2011 rolled around? Whatever, I'm still using it, because whenever I look at Miss Jody Watley, the word comes immediately to mind. With her impeccable fashion sense, her keen notion to be ahead of the trends, and the sweat-your-perm-out grooves that made her signature hoop earrings swing, Jody Watley personifies the term, and it's hard to not succumb to her energetic panache. You can try, but I wouldn't recommend it. When it comes to the spread of music she's put out, Watley's persona is just the decorative bow on a package talent. As her 30+ year career displays, she's been a chameleon of styles and vibes, with one of her finest morphs happening on her often forgotten junior effort, Affairs of the Heart.
Center

Like many of her contemporaries (Madonna, Janet Jackson, Pebbles, and Paula Abdul for starters), Watley had the task of revamping stylistically once the '90s rolled around. The bubblings of the college-bred grunge movement and continuing flourish of hip-hop culture were impeding on the mainstream and changing music listeners tastes. So where does the '80's dance-diva fit into the equation? The '90s gave the answer, as sound changes came into the fold. They played up the romantics, got a little maternal, introspective even, and became well, sensual softies. Not that that's bad -- it was good. For Watley, to show maturity beyond the pop ditties of her first two hit albums (1987's Jody Watley and 1989's Larger Than Life), the approach of Affairs of the Heart was to circle the album in a concept exploring the many facets of relationships. Not just the rolling-in-the-sheets kind, but those of spiritual, familial, and personal quality as well.

Somehow the idea of Watley toning down her fierceness (there is that word again!), didn't seem to bode well, as the album became one of the most overlooked albums in her catalog. Maybe the listening public back in '91 wasn't ready for their diva of dance to play soft, wear a relaxed men's suit on the album cover, or discuss stuff like spiritual personal awakenings or -- ugh -- female emotions. Sarcasm aside, through used record store haunts, Affairs of the Heart came into my possession -- about 10 years after its initial release. It had a little dust on it, but it was just as sharp as what was playing during the turn of Y2K and was even, well, better. In its 20 years of shelf life, the topics on this record are still just as timely and prove that for female vocalists you can have the best of both worlds and still evolve as an artist. It's an album that has actually grown with me moreso than any other of her releases, and that's because the artist herself grew on this. Her Shalamar days are long gone, and she's not "looking for a new love" or a "real love" anymore -- she's found it in more ways than one.

With her producing and writing mate, André Cymone once again at her side, Watley crafted an album that is an attractive blend of Quiet Storm, New Jack, and soul-pop with ballads and down-tempos at the forefront. Instant change in tone happens on the sparse inspirational piece, "It All Begins With You" and she gets her Anita Baker on with the duo of "Commitment of Love" and "Until the Last Goodbye" where she delivers the message of sticking relationships out for the sake of love and for the sake of the children. Nary a preach is found within these moments, and furthering this is the lush slow dance of "Always and Forever" and the '60's Supremes-esque closer, "Stolen Moments." On the flip, Watley still has some sex kitten bite in her as the slinky opener "I Want You" is a tune that will make your backbone slip when you reach its uh, "climax." Wit from the Larger Than Life days are back on bass lickers "Strange Way" and "Call Me" with their feminist finger wags toward trifling and relationship-phobe dudes. One of my favorite moments is the shoulda-been-a-single, "Dance to the Music" where the dance-pop funkiness just warrants some moves to be busted as Watley provokes us to "leave our worries behind" and to "concentrate on having a good time." Note taken.

Another wonderful moment that I can't forget is the David Morales-produced top 20 hit, "I'm The One You Need." The most successful of the album's three singles winks at the down-tempo and trip-hop music that would come to fruition on Watley's later albums such as 1999's Saturday Night Experience and 2001's Midnight Lounge. Still it's the title track that bridges it all together as its core theme rest in the lyrics: "I don't want to live without music/don't want to live without love/just want to bring you joy/so I'll share with you my feelings/I'm gonna sing it from my heart." And that she does on Affairs of the Heart and what Watley continues to do.

So I could really care less about the fact that this album wasn't a huge commercial success, because Watley won in the end, by taking herself out of the box critics love to place dance-divas in and made an album that showed her versatility and honesty as an artist. And that my fellow music nerds, is truly fierce.


TAGS:  andre cymone, anita baker, Class of 1991, david morales, janet jackson, jody watley, madonna, paula abdul, pebbles, shalamar, supremes
Previous: ‘Ain’t Nobody’ Can Do It Like Chaka, But Mary J. Blige Does A Good Job Next: Morning Soul: I Got Nuttin’ But Love For Ya, Baby