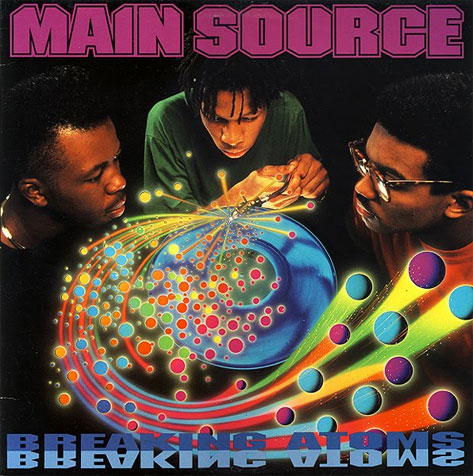 Main Source's Breaking Atoms has always had a mystique among hip hop connoisseurs that I've never completely understood. Since Main Source only released one album I always questioned whether it was more coveted than classic. During the '90s, when it came up in conversation, you would almost think the title was "Breaking Atoms, But You Can't Find It" and, prior to the digital music boom, Breaking Atoms was notoriously hard to find on vinyl or CD.
Center

Main Source was made up of Queens, NY producer/rapper/DJ Large Professor and DJs K-Kut and Sir Scratch from Toronto. When Large Pro left the group in 1992, Main Source disbanded. Though they attempted a comeback in 1997, with MC Mikey D as the third member, contractual issues with their label prevented their second album F--k What You Think from ever being released.

Production and sampling are really what make this album one of the valedictorians of the class of 1991. Main Source really set a new standard for crate digging (finding break beats and samples on obscure records) drawing on samples from artists like Detroit Emeralds, Bob James, Skull Snaps, Ike Turner, James Brown, and The Meters. The song titles are also rather obscure and often have nothing to do with the actual song, further lending to the mystique. Since this was the era of intelligent hip hop, title obscurity automatically insured an artist would be considered conscious or "deep."

Understandably, the beats on Breaking Atoms tend to overshadow the rhymes, but Large Professor's lyrical skills should not be overlooked. The album's 10 vocal cuts cover a variety of subjects with a blend of thugged-out and average Joe humor. Devoid of the egocentric posturing and bleeding-heart positivity that have reduced many rappers to one-dimensional personas, Large Pro gives the listener a guided tour of New York's streets circa 1990 complete with tips on how to survive a dice game, a break up, police brutality, and a night on the town. Elsewhere, P's bravado more than matches up to that of his contemporaries, where lyrics like "the mic's (his) instrument and (his) skills are infinite" simultaneously display a semi-serious edge, entertaining while keeping it street. While never achieving the lithe verbal skills of a Big Daddy Kane or a Rakim, Large Professor plays to his strengths, enhancing his widely appreciated production with vivid imagery as opposed to virtuosity.

So first, let me get the requisite homage to "Live at the BBQ" out of the way. Yes, I said it. No song from that era has been so worshipped, revered, and deferred to. In fact "BBQ" holds such status in hip-hop circles that, before I had even heard the song, I knew the standard line on why it was so great was "it was Nas' debut on record, and his verses were so great he stole the show from Main Source." When Nas leads off the song with "Streets disciple/my rhymes are trifle/I shoot slugs from my brain/like a rifle" you know right away this is a genius in the making, not some off-the-corner MC. The groove draws you in because it combines the grimy drum sound that was becoming popular at the time, with a jazz-influenced splash cymbal consistently on top of it. The chorus subtly adds two chords of wah-wah filtered guitar and the crew chanting "It's like that y'all/like that y'all," which all make the record flow seamlessly. Producers making records for ringtones could take a major lesson from "Live at the BBQ."

"Looking at the Front Door" is probably the more widely recognizable single on Breaking Atoms, primarily because C+C Music Factory sampled it that same year for Lisa Lisa's #1 R&B single "Let the Beat Hit 'Em." Large Professor turned a brief sample of jazz trumpeter Donald Byrd's "Think Twice" into one of the smoothest bass lines ever. The song's subject is a familiar tale of thinking about leaving when your significant other is acting up, forcing you to seriously consider leaving aka "look at the front door."

"Peace is Not the Word to Play" critically examines how a serious word like peace was being turned into frivolous hipster slang in the urban community, while simultaneously speaking and acting violently towards each other. The line "I know people who will shoot you with a piece/then turn around and say peace" sums up the message of this song better than I ever could. It is also one of the first hip-hop songs I can recall with a true bridge in its arrangement structure -- a sample of The Meters' "Britches." The snare drum holds down the backbeat instead of the kick and sounds as funky as if it was recorded in a cinderblock basement with no furniture.

Large Professor has contributed a significant body of production work and lyrical collaboration to the genre since departing Main Source. His credits read like a Who's Who of critically acclaimed lyricists: Big Daddy Kane, A Tribe Called Quest, Organized Konfusion, Mobb Deep, Masta Ace, Busta Rhymes, etc. In more recent years he's produced for current MC's such as Joell Ortiz, U-God, and Cormega. He also continues to tour globally as a DJ. Kut K also went on to produce tracks for Big Pun, Fu-Shnickens, and Queen Latifah.

I know Breaking Atoms' production style did not emerge from a vacuum -- the influence of De La Soul's 3 Feet High and Rising and the Beastie Boys' Paul's Boutique is evident. By building on the innovations of these albums and collaborations, Large Professor created what could arguably be called hip hop's most unrestrained album and Large Pro's definitive statement. It is a cohesive, timeless expression of hip hop, breaking with musical tradition while mining the past for inspiration. The arguments about what "real" hip hop is will go on forever, but that discussion itself is irrelevant without including Main Source's debut album. 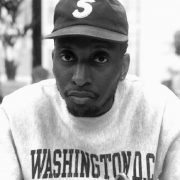