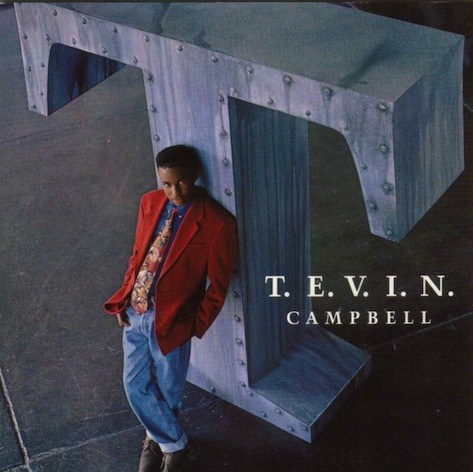 Speaking of Tevin Campbell often brings up either a nostalgia for the time when the then teenager ruled the charts or, unfortunately, snickers about his solicitation arrest and subsequent fall from grace. While Tevin's career was pretty much derailed by that incident (not to mention his slipping sales after releasing the commercial disappointment Back to the World and his last studio album, 1999's Tevin Campbell), it's unfair that he's still judged by that incident, especially in a world where Chris Brown and R. Kelly can continue to chart despite their legal situations. But let's forget about all that unpleasantness and, instead, flash back to a time where a baby-faced teenager ruled the charts and seemed to have the world under his spell.

I learned about Tevin's T.E.V.I.N. the same way that most boys my age at the time did: I had a sister. It wasn't that Tevin's talents had been lost on me. I had dug his 1989 collaboration with Quincy Jones "Tomorrow (A Better You Better Me) and the Prince-penned "Round and Round," which had been featured in the previous year's Graffiti Bridge soundtrack, had been my jam. Still, as a nine-year-old boy, Tevin Campbell wasn't really high on my list of interests at the time. It wasn't until my sister became obsessed with Tevin, particularly after that Fresh Prince episode, that I took a listen and became a fan.

T.E.V.I.N. would be a feat for any artist, but the fact that he recorded this album at the tender age of 14 is just down right impressive. The album was able to launch an eye-popping seven singles. Even if you took off "Round and Round" and the Chubb Rock-featuring "Just Ask Me To," both of which had appeared on hit soundtracks prior to the album's November release (Graffiti Bridge and Boyz N Da Hood, respectively), the album still produced five other singles, three of which were in the top two of the Billboard R&B charts and one that hit the top 10 of the Hot 100. This was due in part to Quincy Jones' guidance and the selection of one of the era's go to producers/songwriters Narada Michael Walden, who was coming off successful collaborations with Whitney Houston and Mariah Carey. But most of it was just the fact that Tevin had an amazing voice and a relatable, wise-beyond-his-years air about him.

The album's biggest hit came in the form of "Tell Me What You Want Me to Do." Released in October of '91, the Walden-produced single became an R&B and pop smash, peaking at number one on the R&B charts and number six on the pop charts. It also became a Quiet Storm staple and remains Tevin's biggest hit to this day. But Tevin's album wasn't all pop balladry, as New Jack Swing was the style du jour. While derivative tracks like "Lil Brother" and "Perfect World" didn't really work, his collaborations with Al. B Sure! (still don't get why he needed that exclamation point) and Kyle West seemed to prove the most fruitful. "Just Ask Me To" was a definite party starter, while the slow jams "Alone With You" and "Confused" tapped into a sound similar to Jodeci -- "Confused" even featured K-Ci and JoJo Hailey on backing vocals. But the crowning jewel of Al and Tevin's work, at least in my opinion, was the album's fourth single "Goodbye."

"Goodbye" to me is a perfect symbol of Tevin's appeal. The song, a kiss-off to the girl that didn't appreciate the love he was offering, struck the perfect balance between youthful and mature, making it somewhat universal in its appeal. As if to drive this point home, the video featured Tevin in a love triangle of sorts with Tatyana Ali, who at the time was around 12, and Tyler Collins, who was 26. Still, it was an innocent enough offering that didn't have the mannishness of what was to come with I'm Ready (I still think "Shhh," penned by Prince or not, was a bit too much after they worked so hard to establish his boy-next-door image).

Of course, any talk of Tevin Campbell will always bring up the million dollar question: Will we ever get another Tevin Campbell album? While he's found success as a Broadway star during his run in Hairspray and has continued to tour and perform, he's only made vague allusions to a possible comeback. Luckily for us (and him), he already has left a great discography that will always keep him in our minds and on our playlists. T.E.V.I.N. was just the launching point for an extraordinary career that shouldn't have ended when it did. Still, as succesful as it was, the album perfectly set Tevin up for the multi-platinum success that would come with the much more mature I'm Ready, which is arguably his best work to date. But T.E.V.I.N. will always hold a special place in my heart. To me, it's Tevin at his purest, without the pressures of a hit album or an industry that makes you grow up too soon and the eventual fall just that much harder.