Common & John Legend Will Make You A ‘Believer’ 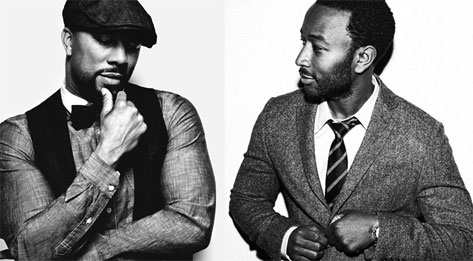 I have to say that 2011 has been a banner year for hip hop. There have been some majorly dope releases this from Big K.R.I.T., Kendrick Lamar, Phonte, The Roots, and, rounding out the year will be Common's The Dreamer/The Believer. I have yet to hear one bad song be officially released or leaked from this project, which is a good sign to my ears that we have another strong collection on the way from the Chi-town MC. Further proof comes with the online drop of the track "The Believer" featuring John Legend. This is the fourth time that the two have linked up on wax but the first song where it's just them with no additional collaborators. The song opens with Struggle Voice Legend wailing like only he can, and he takes us rolling in the deep throughout while Com spits uplifting lyrics about topics affecting urban America and culture. For anyone who may have been turned off by Common going hard on "Ghetto Dreams" and "Sweet," this track should allay your fears. Listen to it right here, peep The Dreamer/The Believer tracklist after the bounce, and prepare to be entertained, uplifted, and amazed on December 20th.
Center