SoulBounce Honors 2011’s Album Of The Year: The Roots’ ‘undun’ 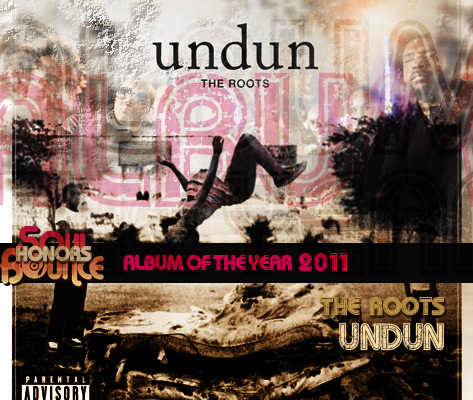 The Roots have outdone themselves yet again with the release
of undun, an expertly crafted concept album that reflects on the life
and demise of the fictitious character Redford Stephens. Accompanied
by a complementary (and complimentary) mobile application that gives
the audience a bit of background on Redford's wayward ways, undun is
the brave exploration of issues affecting those who live in the
margins and the grim options they face down daily.
Center

Clocking in at 39 minutes, this album can be consumed whole and The
Roots deftly cover an expanse of narrative in that slender amount of
time. All of the tracks are dope but personal favorites include the
single "Sleep," a dirge that knocks methodically in anticipation of
Redford's eventual death, "One Time," a tense, swelling song that
embodies the angst of a hustler's day to day life, and "Stomp," a
dangerous missive detailing a man on the hunt. The end of the album
eschews spoken words entirely and relies on piano and string
compositions to tell the rest of Redford's story. Like Redford, the
ending song "Finality (4th Movement)" starts with such hope, but
swiftly ends with disturbingly dark and discordant notes.

undun is a reminder to those of us consumed with "first world"
problems that there are people in America and around the world that
are struggling. It also serves as a cautionary tale of the
repercussions of wasting one's talent. At once haunting and beautiful,
The Roots manage to tell the story of someone else's struggle without
compromising the integrity of the music. Their unflinching view of
life at the bottom is the main reason they are at the top of
SoulBounce's list as our Album of the Year.