SoulBounce Honors 2011’s Group Of The Year: The Roots 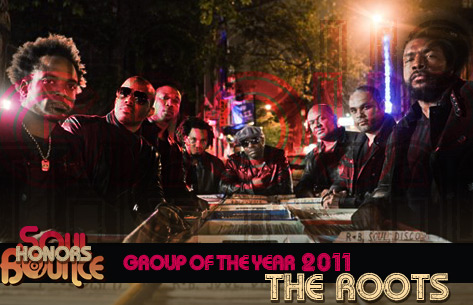 Can you say "three-peat"? Yes, folks, for the third year in a row, The Legendary Roots Crew has been chosen as SoulBounce's Group of the Year. And why wouldn't they be? The hardest working group in show business showed no signs of slowing when 2011 came around. The group always miraculously manages to cram what most artists do in a decade into twelve months. Retaining their house band duties on NBC's Late Night with Jimmy Fallon, the guys still managed to do shows around the globe, appear as the house band on VH1 Divas Celebrates Soul, hold their annual Roots Picnic festival, undergo a personnel change, and, oh yeah, release two critically acclaimed albums. When do they, especially drummer Questlove, ever find the time to sleep?
Center

The year started off as business as usual for The Roots, who remain anchored by original members Quest and Black Thought. The latter part of the year proved to be the most action-packed for the crew, however. In August, it was announced that bassist Owen Biddle would be leaving the group and replaced by Mark Kelley. Then in November, the group saw The Movie, their anticipated collaboration with soul legend Betty Wright, released to praise from soul music lovers everywhere. But they weren't done, announcing that December would see the release of their thirteenth studio album, undun. It was an ambitious feat, a hip-hop concept album focused around the story of the short life of protagonist Redford Stephens. Then, as if to up the ante, it was revealed that the story would be told in reverse order, from death to life. How The Roots managed to pull this off is anyone's guess, but the fact that they did it is nothing short of astonishing.

2011 wasn't without some controversy for The Roots, either. During Republican presidential candidate Michele Bachmann's walk-on for Late Night, they decided to play a snippet of Fishbone's "Lyin' Ass Bitch." It was, perhaps, some of the best underhanded snark ever seen on late night television. Of course this ignited a brief but intense firestorm of controversy, with some even calling for them to be fired from the program. Luckily for us (and Jimmy Fallon), the group was only reprimanded and their walk-on tunes must undergo a screening process.

Who knows, 2012 might be the year that The Roots take their much deserved break and give some other group a chance at taking the number one spot. But if the past three years are any indicator, I wouldn't bet on it.