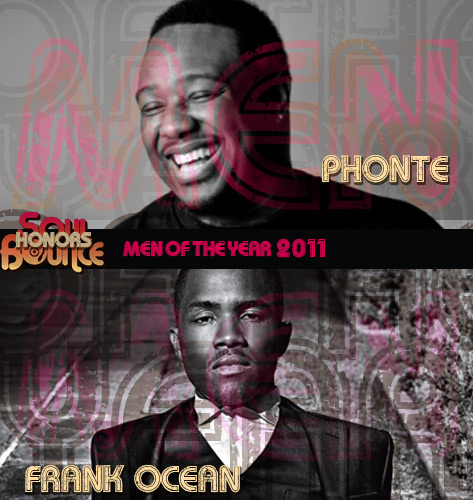 Trying to choose just one man to bestow Man of the Year honors on this year was no easy feat. There were quite a few who made some noise this year, but two stood out from the rest as having made the biggest impact. So it only made sense to choose two Men of the Year, and in 2011 it only made sense for those men to be Frank Ocean and Phonte.
Center

Unexpected. Controversial. Highly-debated. And that's just describing the reactions we here at SBHQ had about electing the most famous member of the Odd Future collective, Frank Ocean, as one of our Men Of The Year. The thing is, love him or hate him, 2011 was undoubtedly Frank's year. He went from being a little known songwriter who's songs ended up with high profile artists (Brandy, John Legend, Justin Bieber) to a household name in his own right. This was thanks to his multi-faceted mixtape nostalgia, ULTRA, where Frank's stream-of-consciousness lyrical style was packaged within more conventional R&B norms to form a sound that was at once refreshing and familiar. It spoke to a newer generation of R&B, one just as (if not more) influenced by hip hop and its (ahem) frankness as it was by R&B songs on the radio.

But if nostalgia, ULTRA had been Frank's sole output, it wouldn't have landed him on the SB Honor Roll. Frank and his hype machine proved to be the gift that kept on giving, leaking unreleased tracks left and right throughout the summer like "Thinking About You." Beyoncé even came a-calling and got "I Miss You," one of 4's more interesting moments. Then Bey's hubby Jay-Z and Kanye West tapped him to feature on two songs for their much-hyped joint album Watch The Throne. With his official album, nostalgia, LITE still on the horizon, we can expect a lot more to come from Frank's direction in 2012. -- D-Money

What more can be said about Phonte Coleman that we haven't already uttered at the risk of sounding like a broken record? The man can rap and sing, puts it down on wax and stage, can make you laugh and think in one verse, and is an all-around good dude. In a year when many could be accused of doing too much, Phonte did a lot but when it comes to him it's never too much.

Not only was this his year to step into the hip-hop spotlight solo with Charity Starts At Home, but he continued the path laid by The Foreign Exchange last year, embarking on the Authenticity Tour as it traveled across the country throughout the year as well as performing a few dates with his once again homie 9th Wonder. Their numerous collabos this year were the closest that we'll ever get to a full-on Little Brother reunion and the heat they created together on CSAH and The Wonder Years kept heads nodding.

Aside from easily capturing our Rapper of the Year honors, Tay crooned his way into our hearts thanks to his continued work with fellow FE Music family member Zo!. Together they gave us the musical madness that was "Return of the Mack." Their hilarious remake of Mark Morrison's 1996 hit was the perfect storm of comedy and swag. Recorded as a total joke and to quiet those asking Tay and Zo! for a '90s album, this song has become a highlight of TFE's live shows in 2011. It wasn't all fun and jokes for these two, however, who would go on to make more beautiful music together on ...just visiting three, which had Phonte's stamp and sweet vocals all over it.

In 2011 Phonte just added more fuel to the fire that is our love affair with him. He was named our first Man of the Year in 2008, and as long as he keeps releasing music something tells me this won't be his last time either. -- Butta