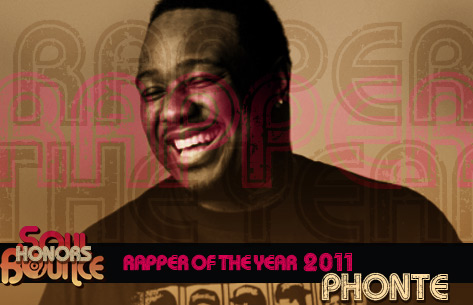 The Foreign Exchange could be considered a permanent fixture here at SoulBounce. We're not only fans and champions of their music but over the years we've formed a familial bond with the entire crew. Loving them is easy and when anyone from the fam drops a project, we're there to support. So when it was time for his solo debut album, it was pretty much a given that we'd love it. But we didn't know how much we'd love it, and Charity Starts At Home truly defied our expectations. When it came to hip hop in 2011 and who most held our attention here and therefore was a shoe-in for Rapper of the Year honors, it was all about one person: Phonte.
Center

Tay rang in the year doing something that sent tongues wagging when he squashed his beef with former Little Brother member 9th Wonder after four years of not speaking. That reconciliation would lead to both artists working together once again on each other's new projects, which would later be scheduled for release on the same date, and an ensuing concert tour. A fiction writer couldn't come up with a more poetic storyline than their reunion.

While the words "New Tigallo! New Tigallo! New Tigallo!" may have been heard on the intro to Charity Starts At Home's first track, "Dance in the Reign," we were treated to new Tigallo way before that album's September 27th release. Tay guested on numerous records this year as a featured rapper with his spit-fire wordplay. From Anthony David's "4evermore," which was released in '10 but became a hit in '11, to Eric Roberson's "Picture Perfect," to The Roots' "One Time," to collaborations with a hip-hop who's who including Pharoahe Monch, Trackademicks, and many more.

Once Charity Starts At Home arrived, those who thought that Tay had turned into an "R&B dude" thanks to his newfound TFE success or that he was only good for a guest verse here and there since Little Brother's breakup were promptly silenced. Phonte adeptly rhymed about the rawness of life, love, and the pursuit of making a living. I can't relate to all that cocaine and hoodrat rap that proliferates the mainstream. I'm truly not about that life. But for me CSAH was one of the realest hip-hop albums I've ever heard. Tay spit real talk about grown man (and woman) ish.

Charity Starts At Home even struck me as a continuation of sorts of the story arc formed by The Foreign Exchange's trinity of albums, Connected, Leave It All Behind, and Authenticity. Providing yet another soundtrack to this thing called life, Phonte showed us that it's not always a pretty picture, but in his hands it at least sounded good.