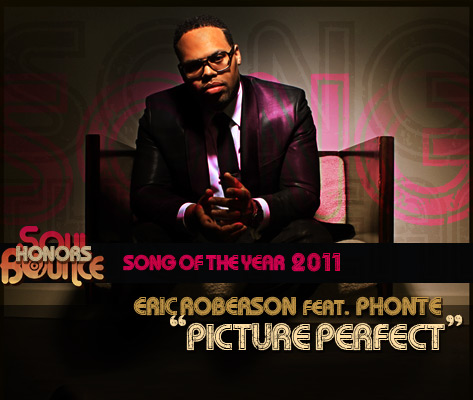 When I first heard Eric Roberson's follow-up to the
GRAMMY-nominated Music Fan First was
to be titled Mister Nice Guy, I expected
an album's worth of jaded, somewhat bitter reflections on the injustice that is
Roberson's relatively low profile in the mainstream. Especially considering how
dark and experimental MFF was,
compared to his prior track-record of straightforward soul, I half-expected him
to pull a Van Hunt on us. Perhaps that's why "Picture Perfect," Mister Nice Guy's official lead single, was such a surprise and a shoe-in for SoulBounce's Song of the Year. It was unexpectedly straightforward, surprising in its classicism, and just that damn good.

It's a love song's love song, whose spacey synths and "I couldn't draw
you better" lyrical premise see it walking the fine line
between romantic ballad and babymaker. What keeps it right in the middle is its
sheer subtlety. Roberson's vocals are mixed so that even when he emotes in his full
chest voice, it sounds like a falsetto croon. (Think Mariah Carey's music video hair -- slo-mo, perma-wafting, always defying the laws of Physics.) And after
Phonte's stellar rhyme, the two
harmonize as the bass guitar breaks script, improvising away as the synths
build. On any other song, a moment like that would be a soaring climax, but
here, the bass variations are buried enough to be barely noticeable, and just as the synths feel
like they're leading to that big moment, everything fades out for
Erro's near-a cappella section that's both the song's resurrection and its
closer.

In fact, the least subtle thing about this single is its
high-contrast black-and-white video, where the two sometimes-singers,
sometimes-rappers ham it up in a stark, white space. On MFF, Erro finally returned to making videos (after a post-Warner
Music sabbatical), and this may well be his finest to date. It's stylish, it's
vibrant, it's anything but restrained.

ut just so we're clear, the restraint on the actual song is
a good thing. Its mood would be ruined by a Teddy Pendergrass-style delivery, and its lyrics robbed of much of their
power. No, "Picture Perfect" is just right as it is -- saying the words
we wish we could say, or have said to us. In a language we can understand.

I couldn't write it better.