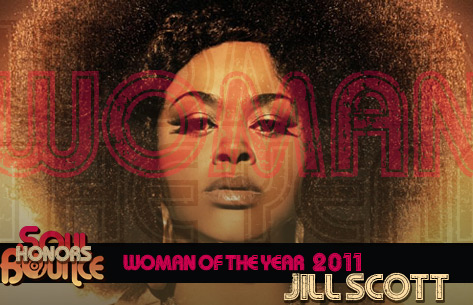 Having closed out 2010 by participating in a landmark
ensemble performance of Nina Simone's "Four Women" at the Black Girls
Rock gala, Jill Scott had tongues wagging from the top of this year. From her
recent weight loss to her sexier, more glamorous image, to her newborn son and
the engagement that barely was, the people and the press agreed: there was much
to discuss.
Center


Coming off a four-year recording hiatus after The Real Thing: Words and Sounds, Vol. 3
-- the aural equivalent of drunk-dialing your ex to alternately curse, plead,
and spitefully (and in gory detail) describe your recent casual hookups
-- the question on many a mind was "Is she really ready?" You're
allowed one cathartic Here, My Dear
moment -- but two over the course of four years would turn that concerned good
will to fatigued disinterest.

But thankfully, as she made clear in the mid-year
promotional blitz of TV and print interviews to promote her upcoming project,
she was doing just fine. Sure, she'd had her moments of crushing lows, but not
only was she over them, we could expect to hear some great musical moments that
they inspired. She was right.

Not only did she plan to drop the long-awaited The Light of the Sun, but Hidden Beach
had readied an additional album of previously unheard material from her time
with the label. In the spring, she was invited by the First Couple to perform at a White House
celebration of American poetry. Predictably, the right wing saw red (see what I
did there?), and she was pilloried all over Rupert Murdoch's media empire for her
longstanding (and yes, arguably problematic) views on interracial
relationships. Still, it all climaxed in a stellar night for her (and fellow
Fox News target, rapper Common), wherein she charmed the crowd with her affable
manner, strong delivery, and a closing line declaring to the room that she is,
"indeed, the shiznit."

The raised public profile she got from the whole endeavor
(thanks, Rupert) led to Light
becoming her first number one on the Billboard 200 album chart, with its
Anthony Hamilton-assisted lead single "So In Love" spending 18 weeks
at the top of the Urban Adult-Contemporary radio charts, breaking a decade-old
record in the process.

As the year drew to a close, she was invited to perform at both the Nobel Peace Prize Concert in Oslo, Norway, and the VH1 Divas Celebrates Soul show in NYC. Her poignant, heartbreakingly understated showing at the latter received a rapturous Standing O, and was cited as one of the few highlights of what was a generally disappointing broadcast.
While the GRAMMYs have inexplicably overlooked The Light of the Sun, it's clear that to all who were really listening, this was her year. And when we think back on the year we had in 2011, our memories will no doubt be scored with the Sound of Jilladelphia.