SoulBounce’s Class Of 1991: Black Sheep ‘A Wolf In Sheep’s Clothing’ 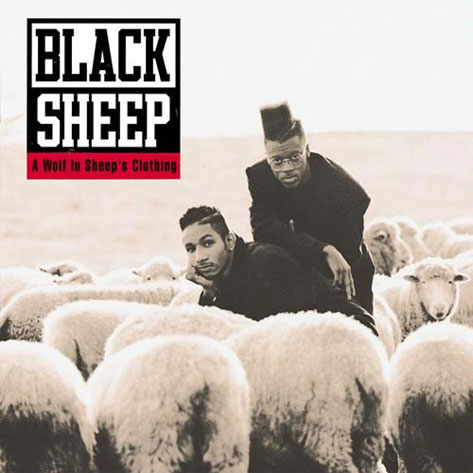 There are countless instances when the best songs on an album are often the ones released as singles. Looking back on Black Sheep's 1991 debut album, A Wolf In Sheep's Clothing, this was definitely the case. The crazy thing was that they didn't drop just one or two hot singles, but four bangers over the course of fall '91 well into 1992. So the rest of the album had to be hot, right? Well, not so much. The project as a whole wasn't as great as those songs would have led you to believe.
Center

What Black Sheep had working in their favor was their association with the Native Tongues -- the hip-hop of collective led by Jungle Brothers, De La Soul, and A Tribe Called Quest. That core group created some of the freshest hip hop of the late '80s/early '90s and begat a slew of affiliated artists who continued to wave the conscious hip-hop flag with rhymes that were abstract, creative, and pretty wholesome considering the rise of gangsta rap on the West coast. Sure, De La's "Buddy" was about sex but they were such cunning linguists and didn't use any foul language in their raps that you could get away with listening to the song in the car with your parents. The same couldn't exactly be said for Black Sheep's A Wolf In Sheep's Clothing, however.

The duo, made up of rappers Dres and Mista Lawnge, were the bad boys of the Native Tongues posse and the first two cuts on Wolf were their declaration of defiance. "Intro" made that quite clear, and "U Mean I'm Not" was a tongue-in-cheek tirade on how to be "hard" but the expletive-filled track might have caught you out there if your only introduction to them was with the jazzy lead single "Flavor of the Month." Released within weeks of Tribe's instant classic album, The Low End Theory, "Flavor of the Month" sounded like the natural progression from one group to the next. But Black Sheep were nothing like ATCQ and brought a totally different flavor to the table -- one that you either dug into immediately or needed time to process and savor (or not).

I happened to fall into that latter category, and for me A Wolf In Sheep's Clothing proved to be an acquired taste that I never really got into. Don't get me wrong, the singles -- the aforementioned "Flavor," the party starter "The Choice Is Yours," the hilarious "Strobelite Honey," and the sexy flow of "Similak Child" -- had me open, but in the context of the album my high expectations were not met. And at 22 tracks long, it was a lot to digest. On the upside, both Dres and Mista Lawnge had tight flows and witty wordplay, which made it possible to find something to like even on songs that were just OK.

The skit on "LASM" (short for "Ladies Against Sexist Motherf---ers") was something that I related to as a 19-year-old quasi-feminist when the women conducting the faux interview with Black Sheep took them to task for the lyrical content of some of their songs. Dres and Lawnge's vulgar answers were so amusing (i.e. saying that "ho" was shorthand for "honey"), that I almost felt wrong for laughing. In another instance, they even got squeaky clean Q-Tip to show his tail on "La Menage" with a sexually-charged verse of his own. It was a little odd to hear Tip cuss and join in on the debauchery, because he had never stepped out of his ATCQ character before.

A Wolf In Sheep's Clothing was a moderate success, with three of the four singles charting and the album reaching #15 on the Billboard R&B Albums chart and #30 on the Billboard 200. Their second album, 1994's Non-Fiction, failed to deliver any hits or catch on with the public and turned out to be their last recording together as Black Sheep before Dres and Mr. Lawnge went their separate ways. A Wolf In Sheep's Clothing would prove to be Black Sheep's fleeting moment in the sun, and although not a classic it did deliver some classic moments.