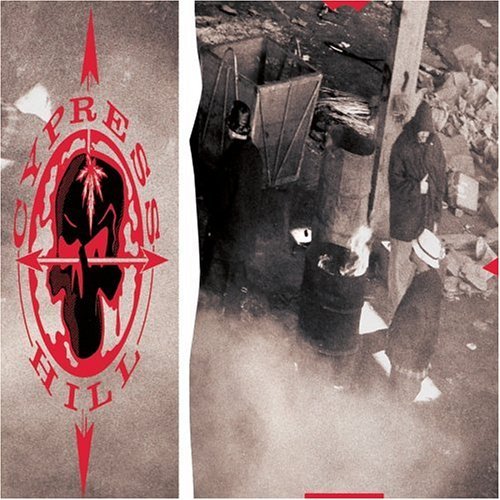 My first reaction when I heard "How I Could Just Kill a Man" the first single from Cypress Hill's self-titled debut album, on Yo! MTV Raps was one of shock and awe. Instantly, I knew it was like nothing the world ever heard before, but it was going to be huge and classic. I clearly remember marveling at the cartoonish-ness of rappr B-Real's nasally whine and lyricist/hype man Sen-Dog's responses juxtaposed against hardcore subject matter. Yet, the lush sound layering and rich beats of DJ Muggs were straight funky. Were they making a parody of gangsta rap or what? To understand how much these guys stood out, consider the list of Class of 1991 that have been reviewed here up to now and the styles of music that were in heavy rotation. All of a sudden, here comes a crew where one rapper sounds like how a pimp might if he were a Looney Toons character, and another one who sounds like an actual cartoon, Tennessee Tuxedo, yet they look like they'd just as soon carjack you as perform for you. Then those weird vocals are rolled out over a kitchen sink of samples, including "air raid" texture of Hank Shocklee's Bomb Squad, James Brown drums, and psychedelic guitar samples. Oh by the way, Cypress Hill's rappers were Latino, so their verses are interspersed with Spanish slang. While they certainly weren't the first Latino hip hop act, they were certainly the first to be this cutting edge and popular.
Center

To put the album in context, it is important to understand what was going on in America at that time. The video of the Rodney King beating was released to the media on March 2, 1991. Cypress Hill and its first single, "How I Could Just Kill a Man" dropped later that August; however the LA riots would not occur until nine months after. Placed against that backdrop, the album makes a lot more sense, and you can hear the warning cries in it. You can also understand why Cypress Hill broke through and was so popular. True, NWA struck first with SoCal gangsta rap, but by this time they had started to break up and go their separate creative ways. Also while NWA's subject matter was similar, their tracks were much more raw and stripped down.

Probably the most iconic and influential song on Cypress Hill is "How I Could Just Kill a Man". I recall feeling really conflicted listening to this song, because the lyrics were so violent, but the beat knocked so well I couldn't keep from head-nodding. As Oliver Wang's spin-off blog, Soul Sides Sliced, points out, all the elements in this song are very sonic. The hi-hats aren't flat taps; they're so thick-sounding you think the sticks are slicing through the cymbals. DJ Muggs also uses the old technique of panning (moving an audio track from the left to the right so as to sound like it is physically moving) on his scratch tracks. It isn't quite as obvious on the stereo, but if you listen in the headphones it is much more pronounced. Soul Sides Sliced refers to it as a "wacked-out dentist's drill" sound. I doubt there's any hip-hop fan past or present that couldn't answer the call and response when on the chorus, B-Real's whiny slow call of "Here is something you can't understaaand" and hype man Sen-Dog's run-on response "How I could just kill a m an!" The narrative invites the listener to sit down and um, partake of some herbs, while Cypress Hill explains to you who they would shoot, why, and that you might do the same thing if you were in their shoes. They also make a classism play to rich people "up in the hills" while they're in the hood dodging bullets.

One of the high water marks of a hip-hop song is when a verse is sampled and used for a hook. A year or two later, Redman would loop and stutter B-Real's verse "Time for some action" for a hit song of the same name, which also became a classic two years later.
Second in the Cypress Hill trilogy of hits is "Hand on the Pump." Again the sample loops pull you in out of funkiness and curiosity. How DJ Muggs came up with looping an obscure hit from the 1950's song "Duke of Earl" for a hip-hop track I'll never know, but that is the very essence of hip hop after all -- taking what you find and making something totally new. Again Cypress gets sampled by Redman and Method Man on one of the greatest beats ever, this time repurposing the "Hand on the Pump" chorus as the closing line of "Da Rockwilda." If you listen closely, you hear Junior Walker and the All-Stars' "Shotgun" on the fade, as a tongue-in-cheek play.

Others may argue, but I think "Phuncky Feel One" is the third standout here. It is a '90s update and homage, literally and figuratively, on the essential James Brown sample. Its electric guitar "chika chika" however, isn't a JB track, but is beefed up to sound like one. It is as close as Cypress Hill comes to a party track where they brag on their rhyming skills. The bridge uses Fred Wesley and the JB's "More Peas," which was same sample used in Showbiz and AG's "Soul Clap."

Despite having two decent singles from their second album, 1993's Black Sunday, "Insane in the Membrane" and "Ain't Goin Out Like That," Cypress Hill's sound and image got hijacked by its newfound audience of suburban white college kids. They also practically became poster children for the Legalize It/NORML movement, which was also largely a white-led effort. These two facts sank Cypress Hill's street cred and cost them their core audience. Since Dr. Dre's The Chronic had obliterated the rest of the music industry earlier in 1993, Cypress did not stand a chance by taking the creative direction they did.

Still, very few hip hop albums can claim timelessness and enduring influence. Cypress Hill the album will rock a party or club today as strongly as it did 20 years ago. This is a testament to its innovation, influence, and place among the Class of '91.