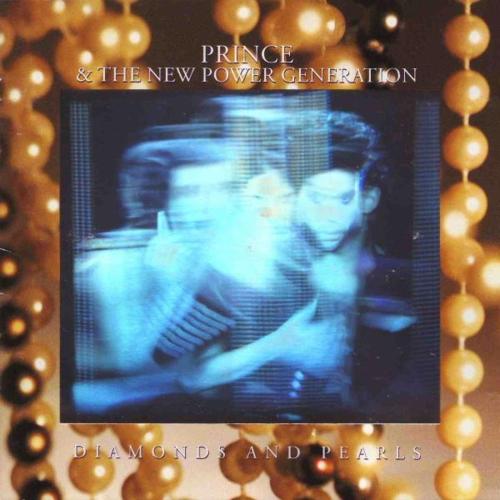 When Prince's single "Gett Off" dropped in the summer of 1991 I was around eight, so a lot of the sexual overtones went straight over my head. Luckily for me, Prince's video for "Gett Off" cleared up any misconceptions that I might've had. The video, which featured the skimpily dressed "Diamond" and "Pearl" and hardly veiled sexual innuendo while Prince skittered and hollered all about, was defiantly sexy and my young little mind took notice. Then, as if to drive the point home, his Purple Majesty appeared on that year's MTV Video Music Awards in his now-infamous "ass out" yellow number as a veritable orgy was acted out on stage. Needless to say, my young mind was blown. When the full album for Diamonds and Pearls followed in October, my mind was blown again, but this time it wasn't about sex. While I'd heard many of Prince's records before this one (the benefit of having younger parents is that they're not as uptight about you raiding their music collection), this is the first one that really registered with me and showed me the true musical genius Prince Rogers Nelson is.

Diamonds and Pearls was the Purple One's eleventh album in thirteen years (thirteenth if you include the soundtracks for 1989's Batman and 1990's Graffiti Bridge) and it still showed no signs of his creative juices ever stopping. It also showed no sign of his ability to sell albums waning as it peaked at #3 on the Billboard 200 and #1 on the Billboard R&B charts.

If you were to judge it by the initial singles, "Gett Off," "Cream," and "Insatiable," you would assume that it was an album that was solely songs about love and, particularly, sex. Of course, that'd be incorrect. Yes D&P had its sexy (and in most cases raunchy) moments, but those were paired with the sentimentality of title track "Diamonds and Pearls" and the world-weary "Money Don't Matter 2 Night" to balance out Prince's more lascivious notions. Also included were surprises like the laid-back "Strollin'," which is perhaps the most relaxed I've ever heard Prince on record.

This was also the first album where Prince shared billing with the New Power Generation. Though members of NPG had been around during his 1990 Nude Tour and were featured in Graffiti Bridge, this was the first album on which they featured heavily. Their influence served to incorporate hip hop and New Jack Swing elements into Prince's already funky sound. Let's face it, there was quite a bit of rapping going on with this record. From the one featured at the end of "Daddy Pop" to Prince's own on "Gett Off" to "Push," where even Rosie Gaines got in on the act. It was a nice update that pulled Prince's sound further into the culture of the '90s without losing his own originality.

Still, some of the parts of the album haven't aged as well as the hits and interestingly enough, they bookend the better tracks. "Thunder" is a bit of jumbled mess whose inclusion I never quite understood (maybe it was just more of his mixing the sacred and the profane). Twenty years later, it still sticks out on this album like a sore thumb. The final song, "Live 4 Love," attempted to recreate the socially conscious urgency of "Sign O' the Times" but ended up coming off cheesier than intended. What sealed its fate especially was the soulless rap that seems tacked on at the end.

Diamonds and Pearls was a hallmark of sorts for Prince. It was one of his last flickers of commercial relevancy, before the battles that ensued with Warner Bros., the writing of SLAVE on his cheek, and the name change to an unpronounceable symbol that all marred his '90s output. While Prince has since proven that he doesn't need hit records or singles to continue to sell out arenas across the globe, it's nice to think about a time when a Prince album could rule the charts.