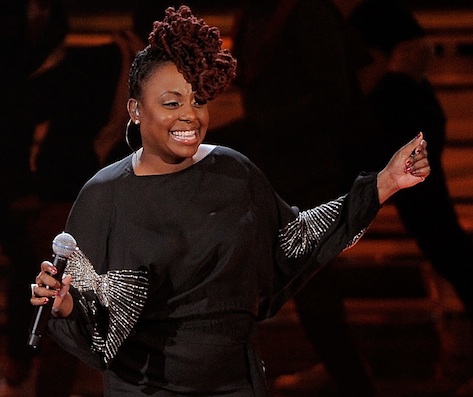 Last night's VH1 Divas Celebrates Soul telecast went off with a few hitches and glitches, but overall the show was an enjoyable watch thanks to a handful of artists who showed up, showed out, and actually sounded good. Mary J. Blige, Kelly Clarkson, Sharon Jones, Marsha Ambrosius, Black Thought, and Boyz II Men immediately come to mind, as well as the all-star band made up of The Roots and numerous musicians behind the scenes holding it down. But there was one artist in particular who owned the night in my opinion: Ledisi.

She may not have been given top billing and she wasn't even on the initial roster of artists scheduled to perform, but Ledisi literally saved the day with her collaborative performances with a few of the fellow divas. She went note for note with Kelly Clarkson on Aretha Franklin's "Chain of Fools," and they sounded so good together that they seriously should consider cutting this record. Next up was her performance with Marsha Ambrosius on Anita Baker's "Sweet Love," which she pulled off rather nicely considering that her and Marsha sang this song with absolutely no rehearsal whatsoever when Baker couldn't make the show at the last minute. Her last stellar showing of the night came when she joined Sharon Jones & the Dap-Kings to sing "Rescue Me" by Fontella Bass. Led and Jones had the Hammerstein Ballroom sounding like a juke joint and set the stage for a fine finale by Mary J. and Chaka Khan. If anyone didn't know who Ledisi was before last night, they were surely put on notice.

As for us, well we've been singing Ledisi's praises here at SoulBounce since our early days back in August 2007. She was the very first artist interviewed for this site back then when Lost and Found was recently released. Two more albums, some high profile performances, and a few GRAMMY nominations later, and Ledisi's name is now rightfully on everyone's lips. We're glad to see that the rest of the world is finally catching up and on to what we've known for years.