What The Game’s Been Missing: The Keytar 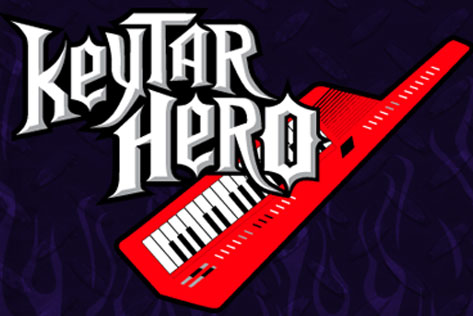 The end is nigh, y'all. According to the ancient Mayan scrolls, Ms. Cleo, Negrodamus, and three mo' white folks, the world is supposed to end in 2012. The signs have been cropping up all throughout 2011 -- an earthquake that shook Washington, DC like a polaroid picture, Katy Perry tied Michael Jackson for number one singles, and something called a "Rihanna" continues to thrive solely based on its ability to...do whatever it is a Rihanna does. And shoot, with the New Year (and the Revelation) upon us, we might as well party like its 1999. Think about it like this: if the world ends, you will have gone out like an effing rock star, and if it doesn't end, well, the worst that could happen is that you wake up naked with a hangover in a pool of your own sweat. Either way, not a bad way to end the world and/or start January 2012.
Center

With all this being said, there is one vital instrument that is needed to get the apocalyptic party started. It was created specifically to send out the clarion call to the masses announcing the End of Time (no Beyoncé). It's so vital. It's so necessary. It's the keytar.

Honestly, this is what the game has been missing, and for a really long time. This instrument, created during the 1970s, takes the musicality of piano keyboard, the electronic funk of the synthesizer, and the portability of the guitar and mashes them together to make a machine made specifically for heralding in the arrival of the Four Horsemen. The keytar is the mechanism through which the funk is made holy and real for the rest of us.

It should be no surprise then, that the one and only Prince Rogers Nelson has a patent on his very own keytar, dubbed the "Purple Axxe," which allows him to entrance his audiences with his eyes while simultaneously making magic with his fingers. The Purple One represents the spirit of the keytar, its iconoclastic mishmash of varying ideas and ways of being that transport you to another place, a higher plane...

...But seriously. This is the instrument that should be played at Dionysian bacchanals all across the globe as the world brings the new year -- or impending doom. It is only right that we are rocked into oblivion by instrument of the man, nay, the symbol, who's personal brand of androgynic sexual tension and musical innovation taught us how to appreciate a man in heels. I mean, if we are going to go out, we might as well go out in style right?