What The Game’s Been Missing: Bodyroll Music 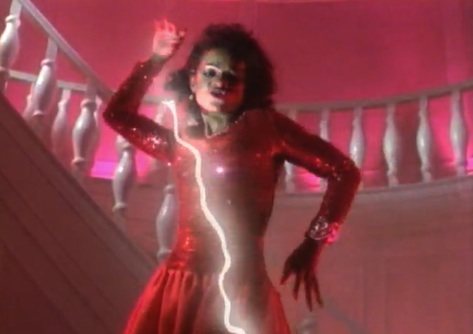 The BodyRoll, defined by Urban Dictionary as "a dance move in which the entire body goes through a wavelike motion focusing on the hips," goes hand and hand with black music. As artistic movement it ranks up there with Alvin Ailey, Judith Jamison, and Debbie Allen-level moves (you young tenderonis can keep the boom-kak). Need to work your way out of an awkward situation? Bodyroll it out. Trying to get your stomach right for bikini season? Get your muthafunkin' (body) roll on. Bodyrolls signal abdominal strength, vitality, and indicate one's fertility or virility in the mating dances performed at the club. Most importantly, they are our spirits way of saying "this song is the shiz-nit."
Center

It's no easy feat to get juuust the right jam to induce mass bodyrolls -- there are certain criteria that must be followed: a) approximately 25-35 bodyrolls should comfortably occur per minute, in rhythm with the song; b) words must be sung or spoken or some combination of both; rap does not count, and c) an immediate stink face should be induced in all listeners. And to get the choicest of sounds to get the best bodyroll out of the audience, you need the right instrumentation: the syncopated pop of a drum machine, the screams of the keytar, the boom of the bass line. What makes songs like Vanity 6's "Nasty Girl" and Rebbie Jackson's "Centipede" so deliciously good is that is so damn easy to dip your padded shoulders and slide your back out to them.

My favorite thing about Twitter and Facebook is how easy it is to connect with like-minded individuals. Through these channels I have procured tickets to the one-year anniversary of Axel F, a monthly jheri curl funk and champagne soul throw down in Washington, DC led by mix-masters Jahsonic, DJ Stylus, and Adrian Loving, and none other than Phonte, Zo!, and Debórah Bond will be in attendance funkin the place up this month. Please know that chiropractors will be called and backiotomies will be had after this joint is over. According to Butta, bodyroll flashmobs are known to occur (!!!), and it's all because the DJs know exactly what play to make your back bend. They know that the music of Cherrelle, Prince, The Time, Cameo, and many others behold a bodyroll goldmine. At the end of it all, it's not the beats per minute that count, but rather, the bodyrolls per minute that matter.