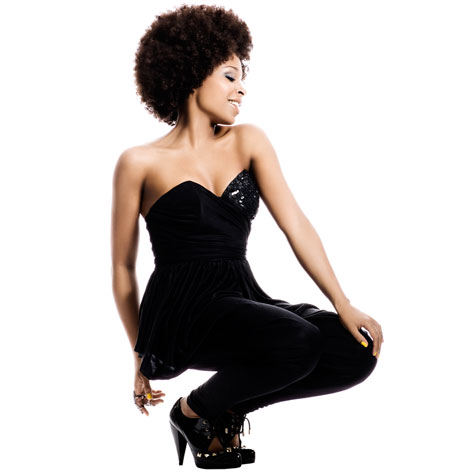 Often times pop music gets the sneer and finger wag for trespassing into soul's backyard and dismembering all of its toys, and re-fashioning them into something unrecognizable. By the way soul purists up-turn their nose to this act, you'd think pop music was akin to that loony mutant-toy-making kid Sid from Toy Story. As a fan of the pop genre from the sugary to the smooth, it excites me when an artist comes along and actually makes the dueling genres get along. By now we should know that the Danish music scene is crackling, with acts like Oh Land, Camille Jones, and SB faves Quadron giving us all something we can feel, and Nabiha is one to add to that growing roster of talent. I stumbled upon Nabiha back in '10 when her debut, Cracks, and lead-off singles, "Deep Sleep" and "The Enemy" caught my ear. I instantly dug her mixing of quirky pop with her silky soul vocals that had her strutting in the same steps as Imani Coppola and Alice Smith. Already racking up hits and awards in her homestead of Denmark, as well as touring with the varying likes of James Morrison, Jason Derulo, and Jamie Cullum, Nabiha is ready to stake a claim Stateside. Currently, she has re-released her debut under the name, More Cracks and added in four new slices of jubilant jams to enjoy. The urgent pulse of "Trouble" has been escalating buzz, and if you catch the VH1 reality circuit you might have heard a Nabiha tune or two on shows like Basketball Wives and Mob Wives. So don't think for a second that Nabiha is letting all this current success put her on pause as she's keeping on the grind and prepping a brand new set for release later this year. So listen up and aurally bookmark this success story in progress.
Center