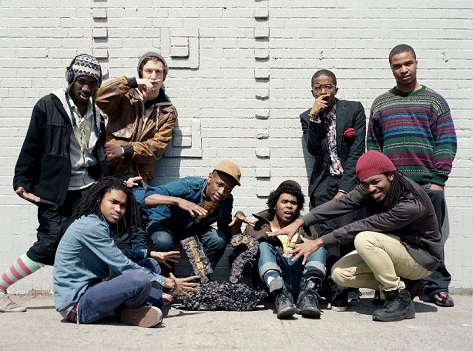 Though Odd Future is probably the best known young collective of musicians, they definitely aren't the only ones. Ladies and gentlemen, allow me to introduce you to Phony Ppl. Don't be misled by their name, though. These guys are definitely the real deal.
Center
After the bounce

Phony Ppl is the name for a nine-man collective comprised of members Dyme-A-Duzin (who's already signed a solo deal with Warner Bros.), Sheriff PJ, Elbie Three, Aja Grant, Bari Bass, Elijah Rawk, Ian Bakerwoman, Maff Yuu, and Temi O. The Brooklyn-based crew knows their way around a groove as their debut project Phonyland. showcases quite well. They span genres from jazz to rock to R&B to hip hop and anything else that they feel like picking up along the way. Flowing easily between effortless vocals, silky-smooth production, and energetic raps, each member brings something specific to the party that makes their sound all at once familiar and unexpected. In fact, they might put you in the mind of groups and collectives of the past (The Soulquarians, Questionmark Asylum, Tony! Toni! Toné!, 4th Avenue Jones, Arrested Development, and a few others spring to mind).

All that being said, Phonyland. is something that you definitely don't want to miss out on. There are standouts like the Tonies-channeling "Does He Really" and "If This Is How Love Feels" Then there are tracks like "Save My Generation" and "Current Events" that show that these cats are wise and talented far beyond their years (did I mention that most of them are barely 20 years old?). Sample the album below (and go ahead and get that free download while you're at it) and then watch a video of the crew performing at Complete Music Studios in Brooklyn. Also be sure to support the crew as they get some shine on tour with Theophilus London.